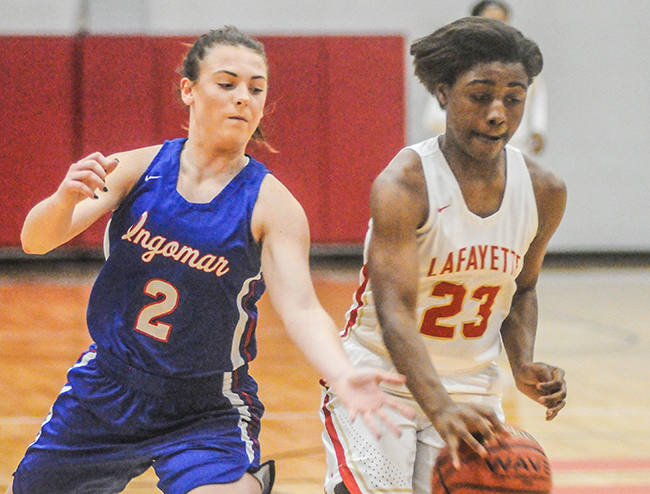 OXFORD — There is a reason Shayne Linzy enjoys playing Ingomar — one of the state’s top girls’ basketball teams regardless of classification — each year. It allows him to gauge where his team is and views it as a measuring stick game. If Lafayette is measuring greatness of their team with the success they have against the Falcons, then this season could be very special.

For the second time this season, and less than a month apart, the Lady Commodores defeated Ingomar inside the LHS gym. The first encounter was on Nov. 10 at the West Union Round Robin with Lafayette (10-0) handing the Lady Falcons their first loss of the season at the time with a five-point victory. On Thursday, the Commodores gave Ingomar their only other loss of the season with a 56-41 victory.

“When we get to play these games (against Ingomar), I love them,” Linzy said. “When we talk strategy we always say ‘the Ingomars of the world.’ Ingomar is a great program and I don’t care what classification they are, they are a great basketball team. We’ve gauge a good part of our season based on how we do against them, win or lose. Getting that season sweep goes a long way for these girls.”

The final score may not reflect it, but Lafayette and Ingomar (12-2) were locked in a game where a double-digit lead did not occur until the final minutes of the game. Until the fourth quarter the Commodores could only get their lead up to nine points.

That all changed when Azariah Buford did what she does best, taking over a game. The Lafayette junior scored a game-high 28 points with 9 of them coming in the final quarter. The Commodores led by three at the end of the third quarter, but Buford’s surge fueled a 20-8 run in the final eight minutes.

“With (Azariah) being so aggressive to the lane and doing the things that she did, other girls are scoring,” Linzy said. “I’ve got a lot of young girls out there and I’m not talking about the freshman, I’m talking about the juniors. They want to be apart of this. Azariah will a lot with creating it, obviously, but the other girls are saying, ‘hey, give it to me and I’m going to help us.’

With the football season having been over for nearly a month, Lafayette’s boys team is whole for the remainder of the season. It has been three weeks for first-year coach Brad Gray having his entire roster at his disposal and the results are slowing starting to show.

Gray nearly had his first signature win at Lafayette, but a fourth quarter rally by Ingomar resulted in the Commodores’ seventh straight loss in a 50-48 defeat.

Through the first three quarters, Lafayette (1-8) hung with the Falcons and even had a lead at times. Trailing by a point, Ingomar opened the fourth quarter with a 9-1 run that the Commodores could not overcome.

“I thought we competed,” Gray said. “I thought we defended well. For the most part we did a good job of pressuring and we were able to score to set up our pressure. Down the stretch in a tight game like that I guess our inexperience kind of showed. We took a few bad shots. A few bad passes that, I guess, aren’t really in our offensive philosophy and Ingomar made the plays and took advantage of them.”

Lafayette is back on the court on Monday when they travel to South Panola.