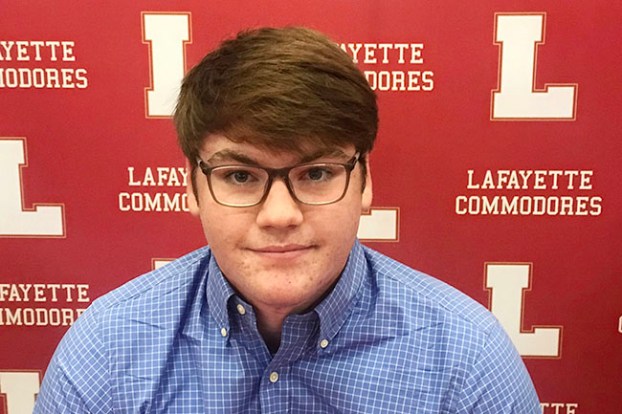 OXFORD — They have been few and far between but Lafayette’s golf team once again has a player continuing their career past high school. Senior Zach Watts signed with Blue Mountain College on Friday at Lafayette High School.

Watts is the first Commodore golfer in three years to sign a scholarship with a college. Parker Brown did not sign but walked on at Itawamba Community College this year. He had offers from Itawamaba Community College and ‘The W’, but Watts felt most comfortable with Blue Mountain and their program.

Getting to Friday was a journey that started this past spring during the MHSAA golf state championships. Watts finished one spot off the podium with a 6-over performance over the course of the two-day Class 5A state tournament. In the second round Watts fired a 1-under 71 at Lake Carolina Golf Club in Madison. At one point during the second round Watts was 6-under through seven holes before fading at the end. The performance got the attention of Blue Mountain.

“It means a lot. I’ve put a lot of hard work into it and it’s paying off slowly,” Watts said. “I shot pretty good at district and had a pretty good state tournament, maybe that brought them in. (My game) has really been looking up these past few tournaments.”

Once the high school season concluded, Watts competed in the summer-long Coca-Cola Junior Tour which plays tournaments all across north Mississippi. In the 16-18 age group Watts finished fourth with 240 points.

The golf program at Lafayette has never been one to garner major success, but since Watts has been a member of the team the Commodores have seen their overall game be raised.

“Zach has been one of our best golfers and one of our best leaders, too,” Lafayette coach Ryan Avent said. “Every year he’s improved, gotten stronger. He grinds. He does a lot on his own on the course.”

Before heading to Blue Mountain next fall, Watts has one more chance to leave Lafayette a state champion when his final season begins in February.

OXFORD — It has been three seasons since Lafayette competed for a state championship. After back-to-back trips to the state... read more