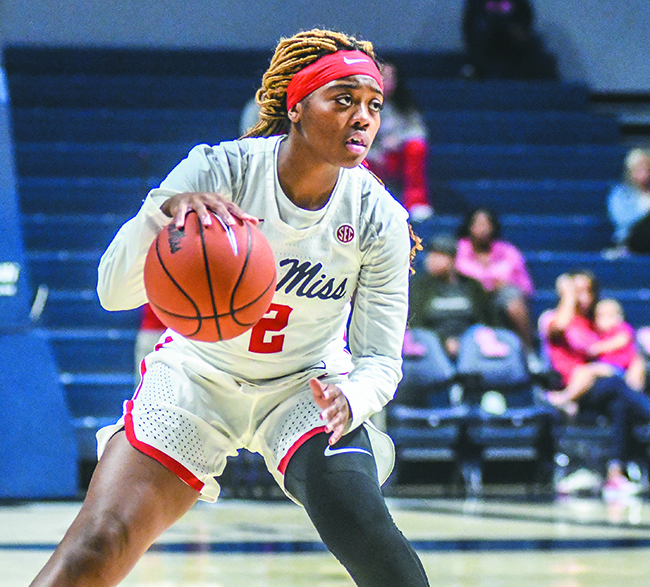 OXFORD — The first year of her tenure at Ole Miss was always going to be a struggle, but Yolette McPhee-McCuin may not have expected the season to start the way it has. The Lady Rebels are currently riding a five-game losing streak dating back to their loss to No. 1 UConn on Thanksgiving.

Since then they have suffered losses to Purdue, St. Johns, TCU and most recently Jacksonville State last Sunday. One of the common themes among those losses from McCuin’s viewpoint has been the effort, or lack thereof, she has seen from her players.

The loss to the Gamecocks was one where the Ole Miss (3-6) had a season-high 20 turnovers and shot under 35 percent from the floor.

At the beginning of the season McCuin said the formula for the Rebels to have success including getting at least 40 rebounds per game. During the current losing skid they have averaged 35.2 rebounds a game and have pulled down over 40 rebounds in just one game with 43 against Jacksonville State.

“Rebounding is still our Achilles heel,” McCuin said. “I wish I had an answer for rebounding, but rebounding is toughness and effort and will. Definitely got to keep showing our players when we don’t get those opportunities and what it does and what it looks like.”

Wins and losses were something McCuin was not going to concern herself with during non-conference play. Her main focus was improving the program every day through practices and games. With five games remaining until Southeastern Conference play begins at Missouri on Jan. 3 and the current slide the Rebels are on, it is getting tougher to stay the course.

Following the loss to Jacksonville State McCuin acknowledged her team needs everyone available on the bench in order to have a shot at success each night. For the past two games the Rebels have been without redshirt freshman MiMi Reid. Reid has been in concussion protocol since Nov. 28 after injuring herself when colliding with a bathroom door and missed the TCU and Jacksonville State games. Reid has been cleared and will be available starting Saturday against Savannah State (2 p.m., SECN+).

“I don’t see enough of the toughness from our group and that’s a concern for me,” McCuin said. “We’re playing in a league that the energy level that Jacksonville State brought, that’s what it’s going to be every night. So, I don’t know if I need to make practices harder or whatever the case may be, but I have to figure this out because that level of effort we gave (against Jacksonville State) was unacceptable.”