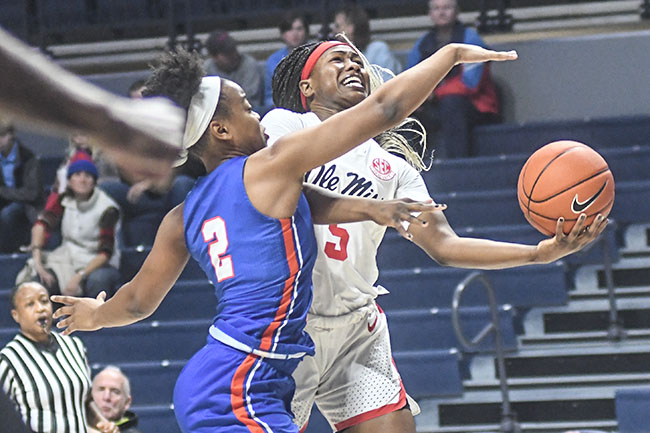 Ole Miss vs. Savannah State at the Pavilion at Ole Miss in Oxford, Miss. on Saturday, December 8, 2018. (Bruce Newman, Oxford Eagle via AP)

OXFORD — Following last Sunday’s loss to Jacksonville State, Yolette McPhee McCuin was in search of ways to get more overall effort out of her team who had just suffered their fifth straight loss. With a week off due to exams the Rebels hit the practice gym and went to work. It paid off as they snapped their losing skid with a 71-54 win over Savannah State on Saturday afternoon in the Pavilion.

It was nearly a historic performance by the Rebels (4-6) who had 62 rebounds against the Lady Tigers. The tally was eight shy of tying the program record for rebounds in a game, which was 70 against The Mississippi University for Women during the 1988-89 season. It was the most rebounds in a game for the Rebels since pulling down 53 against Troy last season (Nov. 21, 2017).

“We just really wanted to come out and play better than we did our last outing,” McCuin said. “When I saw 62 I was like ‘is this a score?’ My team in the past have been top-10 in the nation (in rebounding) and the most we’ve had is 60. So, 62 rebounds against anybody is phenomenal. I know we’re not capable of 62 a night, but we’re definitely capable of being aggressive on the glass each night.”

The record books may not have had a change but it was still a career night for one player. Crystal Allen finished with career-highs in points with 27 and assists with 6. She also tied her career best with 8 rebounds. Allen also joined the 1,000 point club on Saturday, becoming the 30th Rebel to do so in program history.

The Rebels were whole again on the court with the return of Mimi Reid to the lineup. The redshirt freshman had missed the previous to games due to being in the concussion protocol. Reid resumed her role as the point guard, finishing with 7 points, 6 rebounds and 8 assists. The assist total is a new career-high for Reid.

“We had a serious talk before this game about (Reid) being an extension of me on the floor and what’s needed and to stop feeling sorry for herself because she was a freshman,” McCuin said. “I felt like she did that today.”

There was another season high set by the Rebels on Saturday, recording 21 assists and passing the mark of 20 assists they had against Temple on Nov. 14. It is also the most assists since recording 24 twice last season with the most recent occurrence coming against Kentucky on Feb. 22.

“That was something that we really focused on this week,” McCuin said. “We felt like the ball was sticking a whole lot in these previous games. We just hadn’t had the time to work on stuff and this was the first time that we didn’t have a game and we were able to work on stuff and it paid off.”

Azhana Maxwell and Robbi Allen kept the game from getting away from Savannah State (2-5). Maxwell scored a team-high 17 points and Allen chipped in 15.

The Rebels wrap up this current home stand on Wednesday with the annual ‘Kids’ Day’ game against Louisiana at 11 a.m.