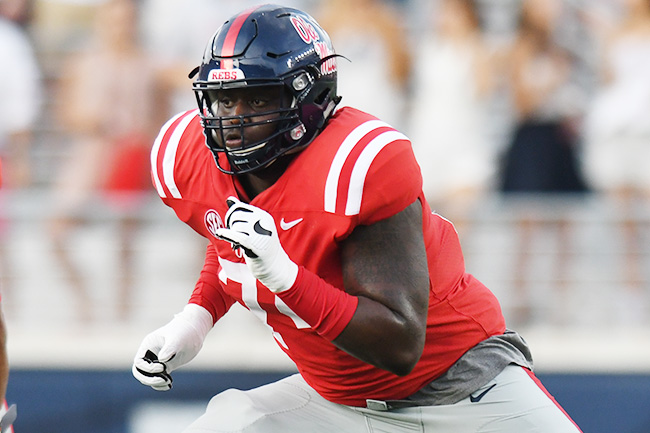 Adding to the list of early departures for the Ole Miss football program, offensive lineman Greg Little announced today that he will be forgoing his final year of eligibility, declaring for the 2019 NFL Draft.

The highly praised recruit from Allen, Texas, Little came to Oxford as the top-rated recruit in the 2016 class that was rated fourth nationally by ESPN. A.J. Brown and D.K. Metcalf, two other Rebels to leave early for the NFL, were also a member of that class.

Little is one of the many Rebels who have been through a lot of ups and downs in his career. He had the opportunity to transfer without restriction following the NCAA sanctions. He decided to stick it out, finishing his career with the Rebels. He was recently named to the AP First Team All-SEC and the Walter Camp All-America Team.

“It feels like just yesterday I joined the Ole Miss family, three years went too fast. From the moment I arrived, I received an overwhelming embrace by the coaching staff, the community and most importantly my brothers,” Little said in a statement on Twitter. “In my heart, I will always be a Rebel and I’m looking forward to the future and grateful for the past. Hotty Toddy!”

Little projects to the NFL as a left tackle, and could be the first offensive lineman off the board in the draft. His size (6-foot-5, 325 pounds) and athleticism is something you simply can’t teach.

The biggest knocks on Little are that he’s not the most physical player and that lineman coming from a college spread offense have struggled recently transitioning to the NFL. But with the NFL starting to mirror the college game more and more every year, these concerns are becoming mitigated more each year.

As mentioned, Little becomes the third Ole Miss underclassman to forgo their remaining eligibility and head to the NFL. All three are likely first-round selections. Tight end Dawson Knox is another underclassman to keep an eye on. He could potentially declare as well.