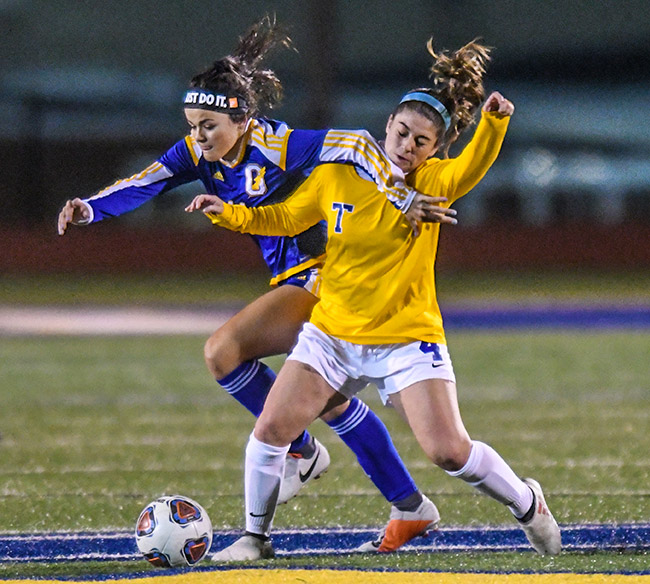 OXFORD — The path to the playoffs and a potential return to a state championship match got a little smoother for the Oxford girls’ soccer team on Tuesday. The Lady Chargers defeated Tupelo 5-3 in a key Region 1-6A match at Bobby Holcomb Field.

The win improves Oxford to 9-0-1 overall and a 2-0 record in 1-6A. With a win over South Panola and Tupelo already and two matches against Columbus remaining, the Lady Chargers will dictate the final push of the regular season in January.

“This is huge for January,” Crane said. “It was nice to get that now and kind of look forward to getting them again in January. They’ll be ready in January and we’ll be, too.”

The Lady Chargers took control of the match quickly with a goal by Morgan O’Connor off a corner kick in the fifth minute for the early 1-0 lead. The Ole Miss finished the match with two goal with an insurance goal in the final minutes.

Between her goal in the first five minutes and the last 10, O’Connor was covered well by Tupelo defenders, causing Oxford to rethink their plan of attack.

Grace Freeman scored her first of two goals on the night in the 24th minute with a nice maneuver around the Golden Wave goalkeeper, giving the Lady Chargers a 2-0 midway through the opening half.

Tupelo finally got on the board 10 minutes later and in the final minutes of the half knotted the match at 2-all entering halftime.

“We knew that they were going to give us a fight,” Crane said. “They weren’t just going to lay down and give it to us. We got a little out of rhythm there in the second half gave up two. We came back and battled back and finished the job.”

The momentum from the first half remained on the Tupelo bench to begin the second half. Sydney Hughes scored 15 minutes in to give the Golden Wave their first lead of the night. The lead was short-lived due to Oxford’s Carissa Strum scoring two minutes to tie the match up for the second time.

Freeman and O’Connor’s goal provided the Lady Chargers with the winning margin, which will be crucial come Jan. 15 as Tupelo will need to beat Oxford by three goals to have a shot at the region crown.

The boys’ match between Oxford and Tupelo mirrored the girls match in the first half nearly identically.

The Chargers jumped out to a quick 2-0 lead only to see Tupelo tie things up and halftime and eventually come away with a 4-2 win in overtime. The win put Tupelo (8-0-1) in the driver’s seat of 1-6A and Oxford dropped to 1-1 in region play.

Thomas Mayo provided both goals for Oxford (8-2) and they came in the first 20 minutes of the match. Mayo’s first was at the nine-minute mark followed by another 11 minutes later.

Much like how the girls’ match played out, Tupelo crept back into the game with tree minutes remaining in the opening half. Will Hughes scored the Golden Wave’s first goal of the night at the 37-minute mark followed by another goal from Luke Overton during extra time of the first half to make it 2-2 at intermission.

With little action transpiring in the second half the match went into overtime. After a nearly scoreless first 10-minute opening overtime periods Hughes netted his second goal of the night to give Tupelo their first lead. Overton iced the game for Tupelo with an insurance goal with five minutes left in the second period.

Both Oxford teams will head south for the Winter, briefly, with games in Gulf Breeze, Florida this weekend before returning home to host Northwest Rankin on Dec. 20.