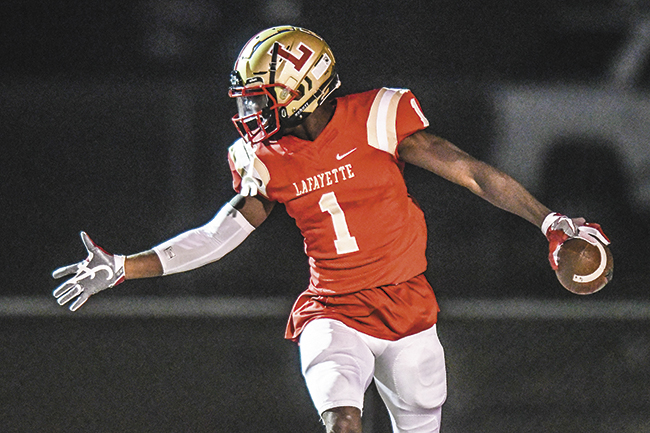 OXFORD — Last Monday Nick Saban was standing in the library at Lafayette High School less than two days removed from Alabama’s comeback win over Georgia in the SEC Championship game in Atlanta. Saban’s presence was not for a speaking engagement to the student body about life lessons, it was to speak to one person in particular. He was there to make sure one of their most coveted recruits was going to stick with the Crimson Tide come next Wednesday when the early signing period begins.

This kind of attention would normally be a well-produced event, but just a simple tweet by the school’s athletic account showing Saban talking with Lafayette head coach Michael Fair was all there was.

That is because it is how Brandon Turnage likes it.

Turnage, the senior athlete on the Commodores roster, is unassuming. Something that is rare for a player who was thrown an offer by every SEC school before his junior year. The star ratings, the recruiting evaluations and the Hudl highlight films are a fine line to walk by prospects and some do not survive the high wire act.

Turnage walks it with ease.

“I didn’t care anything about stars,” Turnage said. “I had a lot of people try to target me and tell me that they don’t know why I have (the stars). I really don’t listen to anybody because I didn’t ask for a star. I was just out here playing football. I wasn’t focused on getting a scholarship and having fun doing what I love. A lot of other people just focus on getting the offer and they distract themselves and they don’t perform to the level that they’re supposed to.”

Not since Jeremy Liggins has Lafayette had a player draw so much attention from some of the nation’s top programs, and for good reason. Turnage has become an ambassador for the school but it is not something that has gotten into his head. He does not roam the hallways expecting the seas to part as he walks by. He is just a Lafayette County son who wants to make his family, friends, coaches, teammates and school proud.

In September, Turnage became the first player at Lafayette to be selected as an Under Armour All-American. There was a ceremony and the entire student body filled the gym to witness it. Turnage did not ham it up and let the environment get to him. He stayed calm, cool and collected.

Throughout his entire senior season people were asking Turnage about his future and where he will play football at the next level. As Lafayette was trying to find their way back to a state championship game, Turnage was able to compartmentalize everything with little effort.

“It doesn’t faze him,” Lafayette head coach Michael Fair said. “Recruiting and stars really ruin a senior season, because the focus goes from a team they grew up with to a team they don’t even know yet. That never happened with Brandon. It was always about the team he grew up with first, it was all about Lafayette.”

This recruiting process is unique. In the very first game of his junior year Turnage suffered what would become an season-ending injury in the first quarter of the first game of the year at Cleveland Central. He missed one year of his high school career, something Turnage can never get back.

With offers pouring in the summer before and zero film to show coaches last season, this year became crucial, to maybe everyone besides Turnage. Missing an entire season with only one year left to showcase their skills, most players might crumble under the weight of the pressure they put on themselves to perform for the scouts sitting in the stands on Friday nights. For Turnage, pressure did not exist.

“It’s never been pressure because I know what I can do on the football field,” Turnage said. “I just took my junior year to sit back and watch and learn. It really just made me more powerful for my senior season.”

Living in Lafayette County and attending a school that essentially resides in the Oxford city limits, the assumption by most who are on the outside looking in would figure Turnage is Ole Miss bound. No questions asked, no debate to be had. That was not the case. Sure Ole Miss, and even Mississippi State were interested — first-year Bulldog head coach Joe Moorhead made a visit just recently — but Alabama was one of the first ones. Turnage committed to Saban and the Tide on Dec. 22 of last year. He had not even taken his official visit yet, which he did last week.

It is a situation similar to what A.J. Brown had when he picked Ole Miss while living in Starkville, but at the same time it is nothing like it at all. The decision is a simple one for Turnage when asked why the Rebels were not an option at the end of the day.

“I’m a man of my word,” Turnage said. “So, once I commit to a school and give you my word I’m not going to change my mind. It’s really hard to explain that to other people, but it’s bigger than what a lot of people make it out to be.”

Choosing to forgo next Monday’s Mississippi-Alabama All-Star game in Montgomery there is only one more game at the high school level left to be played for Turnage. The Under Armour game takes place on Jan. 3 at Camping World Stadium in Orlando. It will be televised by ESPN2 and feature the nation’s top talent. It is one more opportunity for Turnage to continue to be an ambassador for Lafayette and to show country what they should expect from him for at least the next three years in Tuscaloosa.

“It means a lot because it’s big and no ones ever done it here before,” Turnage said. “I have the opportunity to go out and put on for my city and my school and my family and teammates.”

Turnage will sign next week but will graduate in May and then head to Alabama shortly after.