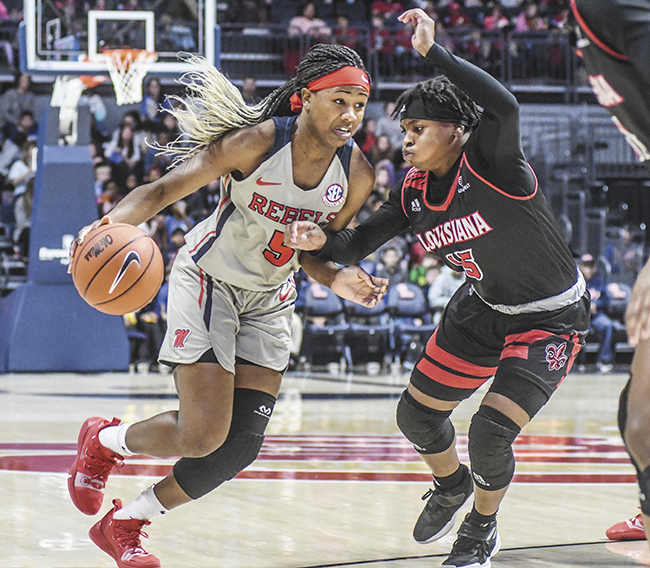 OXFORD — In front of over 7,300 screaming fans Ole Miss gave all the kids in attendance something cheer about on ‘Kids Day.’

The Lady Rebels defeated Louisiana 79-57 in the 16th edition of the annual tradition inside the Pavilion on Wednesday morning. After experiencing a five-game losing streak the Rebels (5-6) have put together back-to-back wins for the first time since Nov. 18.

In her second game back from being in the concussion protocol Mimi Reid had a career day, earning her first double-double as a Rebel. Reid finished with 14 points and 11 assists. Jhileiya Dunlap scored 10 points and pulled down 12 rebounds for the second double-double of the day.

After a sluggish first quarter with the score tied at 11-all the Rebels opened things up in the second quarter, outscoring Louisiana (2-7) 25-5 and taking a comfortable 20-point lead into halftime.

“We’re going to be a work in progress-type team,” McCuin said. “We’re going to have to learn through losses. We did some soul searching and we look like a different team when Mimi is out there and it just gives us more confidence. We want to be better than we were yesterday and I feel like that’s what people saw today.”

For the second straight game, and only the third time this season, the Rebels tallied over 20 assists. In their win against Savannah State on Saturday they recorded 21 assists and on Wednesday they set a new season high with 24 assists against the Rajin’ Cajuns.

“I don’t if we’ve lost a game when we have a high level of assists,”McCuin said. “That means that everyone is joining the party. Not only that, I think everybody shot the ball pretty well.”

Ole Miss hits the road for a game at Louisiana Tech on Saturday for their first true road game of the seasons before returning home for a game against Troy on Dec. 19.

Phil Longo’s departure a blessing in disguise for Ole…