Phil Longo’s departure a blessing in disguise for Ole Miss 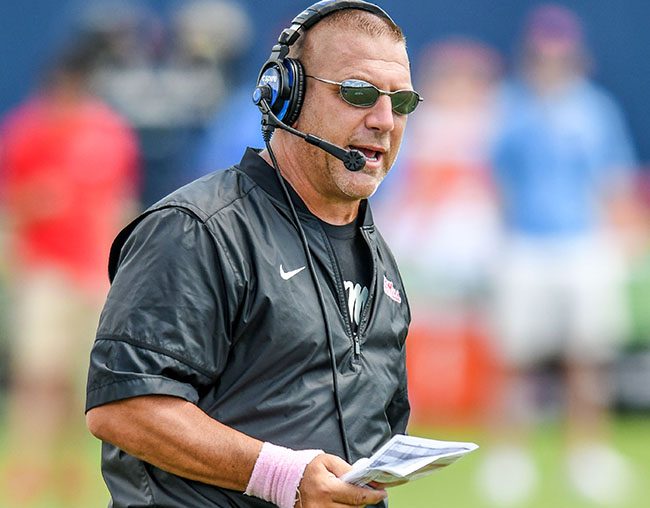 Phil Longo did some good things for the Ole Miss offense. At times, it was electric and exciting, racking up over 500 yards of offense per game in the 2018 season. However, Longo’s system was often stagnant, rigid and ineffective when things mattered most. It’s what Longo didn’t do that could leave Ole Miss better suited without him.

First reported Tuesday, Longo has left Ole Miss as the offensive coordinator, taking the same job at North Carolina under new head coach Mack Brown. No doubt, it leaves the Rebels in an offensive situation that is less than ideal. The unit was already going to be replacing a quarterback and his top three receivers. Now they need to find a new play caller as well.

Short term, it’s a complex and dysfunctional situation. However, from a football perspective, it very well could be a beneficial move for the future of the Ole Miss program. As mentioned, while the offense was capable of racking up gaudy offensive numbers, it struggled tremendously at turning yards into points.

The same offense that rated 9th nationally in yards was just 35th nationally in points. Football Outsiders keeps a stat called OTF – essentially it records how good a team is at scoring points on drives in which they get at least one first down. Ole Miss was 84th in the nation in OTF. That’s a problem that goes much further than simply players failing to execute. It goes back to the offense’s scheme. Longo’s scheme.

Longo’s offense relies heavily on outside receivers running routes on a vertical plane. Think of drawing a vertical line beginning at the line of scrimmage. Most routes are variations of that line. Go routes, comebacks, curls, and hitches are the bulk of the offense. There are very little in-breaking route concepts.

This concept can work against some teams, most notably teams of lesser talent. Clearly it did “work”, look at the yardage numbers. They’re monstrous. But there’s two problems. Teams with better talent at corner – say LSU or Alabama – can play pump and run on the outside. They have the talent and athleticism defensively to cover these routes against the fantastic Rebel wideouts. Ta’amu had just 133 yards passing and completed just 32-percent of his throws against Alabama. Against LSU he threw for only 178 yards on just 50-percent passing.

Additionally, these vertical-plane routes struggle to work as effectively in the red-zone. Hence the scoring woes. When the field shrinks, there are less options for a defender to worry about. Corners don’t have to wonder if D.K. Metcalf is going to run by him deep on a go route. When options are limited, it’s easier to defend. The team needed to utilize more in-breaking routes, slants, pick-plays and misdirection looks ran by the best offenses in college basketball. The simple route tree that works in-between the twenties doesn’t work when the field shrinks.

Throughout SEC play, as the red-zone issue became more pronounced, Longo would continually say everything needs evaluated and looked at. He would say they need to change what they were doing. However, those route concepts consistently remained stagnant. When evaluating the next offensive coordinator to lead the Rebels, head coach Matt Luke needs to find someone who fosters more creativity and who runs a more balanced offense. The point of an offense isn’t to rack up yardage totals, it’s to score points.