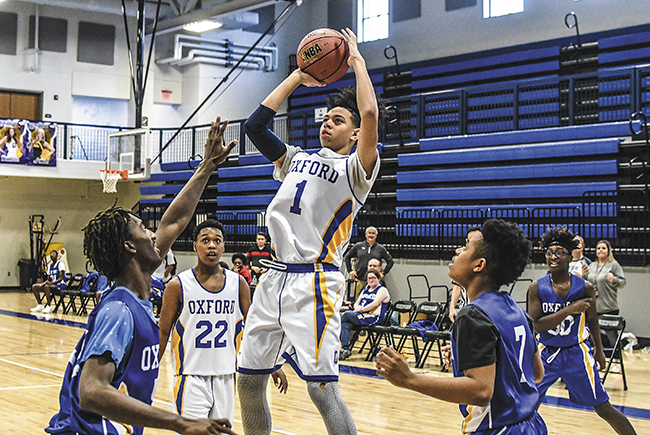 OXFORD – Students lined the balcony and scattered throughout the bleachers during their lunch break at the Oxford High School gym to witness a basketball game. However, this was not a standard varsity of junior varsity matchup.

“I think it’s amazing. No one is different,” said Rose Hickey, an assistant coach in the game and the girls personal fitness instructor at Oxford High School. “I know who the students are, but if someone else was observing, I think it would be difficult to see what students are the ones with disabilities and which ones are not.”

“It’s something I’ve been wanting for three years,” said Minnie Gates-Powell, who teaches the special education students at Oxford. “It exceeded my expectations. The motivation and competitiveness was wonderful. The spectators were great. They were excited about it.”

The games not only were a way to increase student interactions with others that they may not communicate with often, but it unintentionally served as a sort of pep-rally leading up to Friday night’s Oxford-Lafayette basketball games. At halftime, while the crowd erupted when Embry Fox, one of the students participating in a halftime skills competition, effortlessly sank consecutive free throws and layups.

“We want to accomplish having all students being able to participate, together, in a sport they truly love,” Hickey said. “That’s what it’s all about. It’s such a great thing that the school has started.”

Oxford will play four more basketball games on Tuesday and Thursday afternoons in January between the 15th and the 24th. They’re hoping it will continue to draw more students and maybe even people from the community.

Defense leads way for Rebels in blowout of Southeastern…