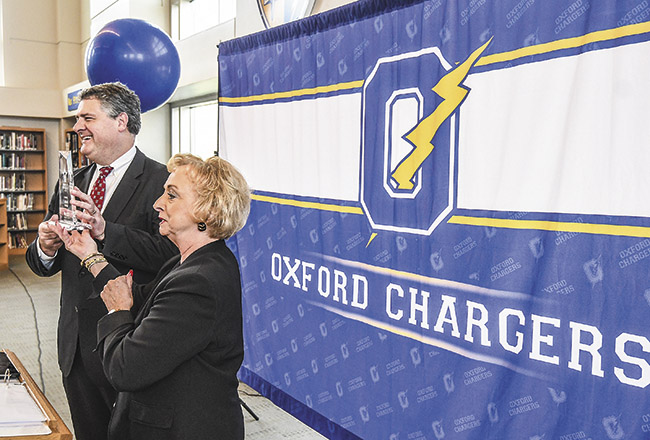 Oxford School District superintendent Brian Harvey, left, accepts the "Award of Excellence" from Carey Wright, state superintendent of education, as the Oxford School District was recognized for receiving an "A" rating in the 2017-18 school year during a ceremony at Oxford High School, in Oxford, Miss. on Thursday, December 13, 2018. (Bruce Newman)

OXFORD – As part of an ongoing tour, the Mississippi Department of Education toured through Oxford and Lafayette County Thursday to honor all A-level school districts.

Both the Oxford and Lafayette County School Districts were honored on Thursday, as MDE representatives and elected officials were on hand to recognize their respective work.

“Don’t ever let anybody else tell you ever again that Mississippi’s at the bottom,” MDE State Superintendent of Education Dr. Carey Wright said. “That was the old school, and that story is long gone.”

While speaking at OHS, Wright said these distinctions exist to inform the communities just how well their schools are doing.

She also pointed out the rewards remind students that it’s not just about going to school, but it’s also about setting them up for what happens after, such as college studies and careers.

Wright said the MDE doesn’t just base these distinctions on student scores, but how each district grows year to year.

In a message to students, Wright also said she understands how hard students work at their studies and activities, and thanked them for their hard work. Wright also addressed teachers, saying she wanted to remind them their students are making history.

“It’s just a pleasure to be able to brag on the state,” Wright said. “We’ve never been where we are right now, and I’ve said to my board members the best is yet to come.”

After accepting the plaque from Wright, OSD superintendent Brian Harvey said the award wasn’t his to claim, saying he “works with the best staff in the state.”

“This is tough work, and at many times it’s messy work,” Harvey said. “Our teachers get down in the ditches and they work with these kids and help them success and produce.”

Wright made a point of saying Oxford School District has now been in the A district for three consecutive years, which lands the district in the top 6 percent of all Mississippi school districts.

“It’s not work that can be done in six months or a year,” Harvey said. “That’s a five, six-year process.”