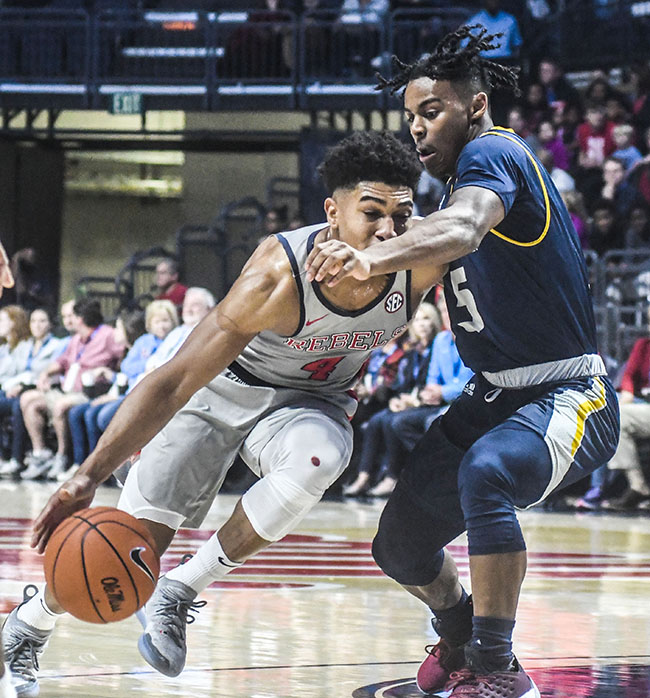 OXFORD – A second half scoring barrage saved Ole Miss after a first half blunder, running away from Chattanooga at home by a final score of 90-70.

As is a trend on the year, Ole Miss struggled tremendously to close out the first half. The Rebels led by 12 with 5:23 to go in the first half. By the end of the halftime buzzer, Ole Miss was trailing 39-37. Chattanooga closed the half on a 18-4 run to take the lead. In the first half alone, they shot 6 of 10 from three.

“We had some breakdowns and they made you pay for every one of them. We couldn’t guard the three,” said head coach Kermit Davis. “It was one of those things where we came in at halftime, and I’d like to tell you it was a bunch of great adjustments, but it really wasn’t. We competed a lot harder, we did some things we’ve been working on in practice.”

Chattanooga started the second half right where they left off, making a pair of three pointers to take a 45-39 lead. Then things changed. Ole Miss started hitting threes themselves. Aided by some steals on the defensive end, a rash of two threes by Breein Tyree and one a piece by Terence Davis and Devontae Shuler sparked a ridiculous 28-0 Ole Miss run over the course of 5:53 of game time.

“We hadn’t really been tested at home yet. It was something that I thought would happen, and it did,” Davis said. “It was my first time as a coach at Ole Miss to get down at home and watch fans and players respond. To me, it was a cool thing. I enjoyed that. You saw the fanbase get into it and I think they were a big part of the run.”

Breein Tyree was the hot hand for Ole Miss. He scored 18 in the half on 6-11 shooting and was 3-4 from deep. He had just 2 points in the first half. Terence Davis was also remarkably efficient for Ole Miss, going 8-10 from the field and scoring 20 points.