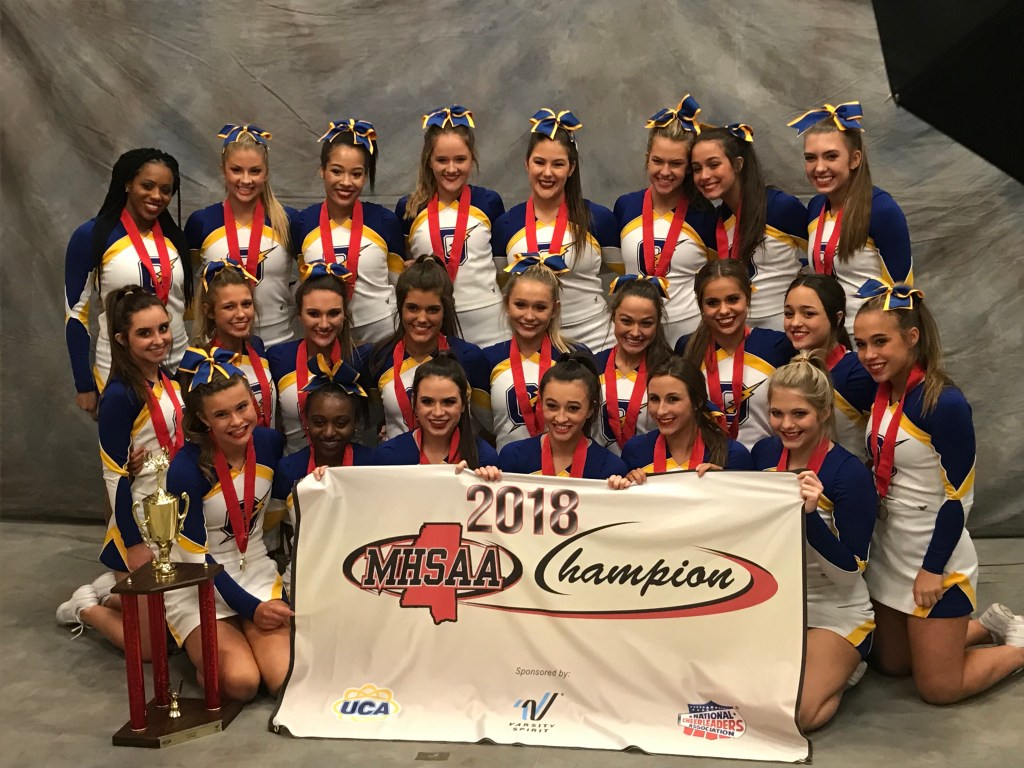 Beating out a field of 16, Mylene Cromwell, in her first season as head coach, led the girls to Oxford High’s first state title since 1999. Before coaching Oxford, Cromwell coached cheer for 14 years throughout Georgia and Virginia. Monday, she remarked on how thrilled she was with the way her girls responded from all of the adversity around the coaching changes, culminating in the state title.

“It’s very exciting. I’m so proud of them,” said Cromwell, who also teaches government at Oxford. “They’ve had to adjust to my expectations. A lot of things change with the new coaching staff. We had to get to know each other and figure out my expectations. It was a lot of hard work and they persevered.”

At states, Oxford competed in a competition called “gameday.” A diversion from traditional cheer competition of three-minute routines set to music, gameday is meant to compete in an environment that simulates cheering at a football game. As part of the gameday routine, they had a band chant, a sideline situational chant related to offense or defense, a full cheer, and a fight song. The whole routine totals three minutes.

“To me it’s what cheerleaders do. You don’t go in front of a crowd and do a two to three-minute routine with music. We competed in what we do,” Cromwell said.

The 23-person team has only four seniors on the roster. Cromwell refers to Meg Anderson, one of the seniors, as the de facto ‘cheer mom,’ for how she leads the team. Anderson said she used to throw up backstage during competition cheer, just from nerves. But Saturday in Jackson was different.

“We were so nervous at the end when they were announcing the team winners,” Anderson said. “We do this literally every single day for an hour and a half. The past week we had state testing, so in third period practices we had practice cheering in front of a crowd. Going out there and performing was just fun. There were no nerves competing, but at awards we were freaking out.”

In scoring the competition, the Oxford team excelled in an area of the competition relating to energy and crowd engagement. This was no news to the team. They said that while they practice hard and don’t like to get embarrassed, there’s always another gear they can get to in a competition setting.

“That’s one thing I noticed about this squad, even at camp. They do a great job of getting out there and getting the crowd to interact and showing spirit,” Cromwell said. “We call it ‘hitting the crowd.’ And I told them, ‘you do a better job of anybody I’ve ever seen at hitting the crowd.’”

For the senior crowd, it was quite a high note to leave on. Anderson didn’t compete in 2017 due to a fractured vertebra but remarked on how remarkable it was for a class to ride out on back-to-back national championship and state championship honors.

“I love that we finished our high school career strong. I hope that they continue it,” Anderson said. “They’ll have a good returning squad… For us, leaving on this high note is so special. It’s the best way you can go out.”

Oxford’s team is relatively young, with only four seniors leaving, they should be able to compete at this high level for a few years to come. The dance team at Oxford also placed fourth in the dance portion of the state competition.