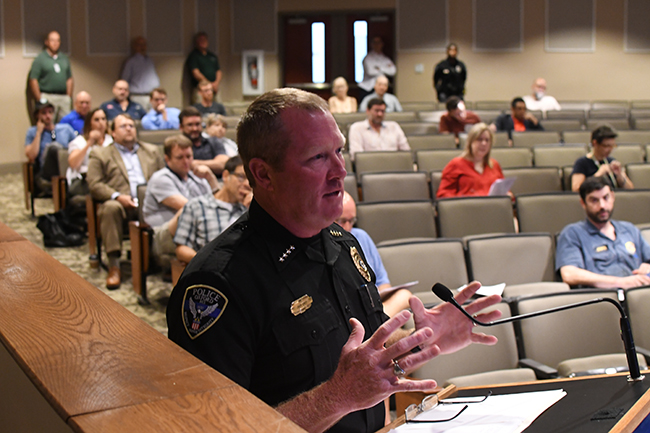 OXFORD — The position of sheriff in Lafayette County could continue to be a family affair. Oxford Police chief Joey East announced his intentions to run for the position during Tuesday night’s Oxford Board of Alderman meeting.

East, who is the son of the late F.D. ‘Buddy’ East, will try to occupy the office his father sat in since 1972 before passing away due to illness in September.

It was a decision that had been mulling around in East’s head for some time, but it was also one that he settled on a couple months back. He just had to wait for the right time to formally announce his intentions.

“This is something that me and (my father) had talked about a lot,” East said. “When he passed (the idea) just kind of lost a little thing to it. It was something I always wanted to do because he’d done it. Then the people of the community reached out and it was heavy on my heart. I just had to do it. I had to try. So, I just said I’m going to get in there and try my best.”

Since ‘Buddy’ East’s passing, John Hill has been serving as interim sheriff.

East has been with the Oxford Police Department for 24 of his 27 years in law enforcement. He asked the Board of Alderman for a leave of absence to dedicate time to campaigning next year. The board granted his request but did not specify when it would take place and there must be an interim OPD chief appointed. East is expecting his leave of absence to not begin any earlier than the end of January.

“I have said it publicly, and a million times before,” Mayor Robyn Tannehill said at Tuesday’s Board of Aldermen meeting, “There is not a community in the state of Mississippi, or anywhere else for that matter, that I think has a more professional, ethical, hard working police chief. You make us proud everyday.”

The qualification period for the 2019 election begins on Jan. 2, which is the first day East can officially qualify to run.

East’s candidacy also comes about a month after the Board of Aldermen announced updates to the city’ policy for city employees announcing a candidacy and seeking election.

Employees running for a full-time position must get the Board of Aldermen’s permission for a leave of absence, without pay, at the time he or she announces their candidacy for office. Since East is running for a position within Lafayette County, he’s required to take a lease of absence.

An interim police chief will be named at a later date but East has recommended his two majors to be considered by the board for the position.

The position of police chief is one that is appointed and does require an election. Campaigning will be something new to East, but also something completely familiar to him at the same time once he begins next year.

“Talking to people and going out’s not going to (bother me),” East said. “A part of law enforcement is talking to people. This is where I grew up so that right there feels good. Kind of second nature in a way.”