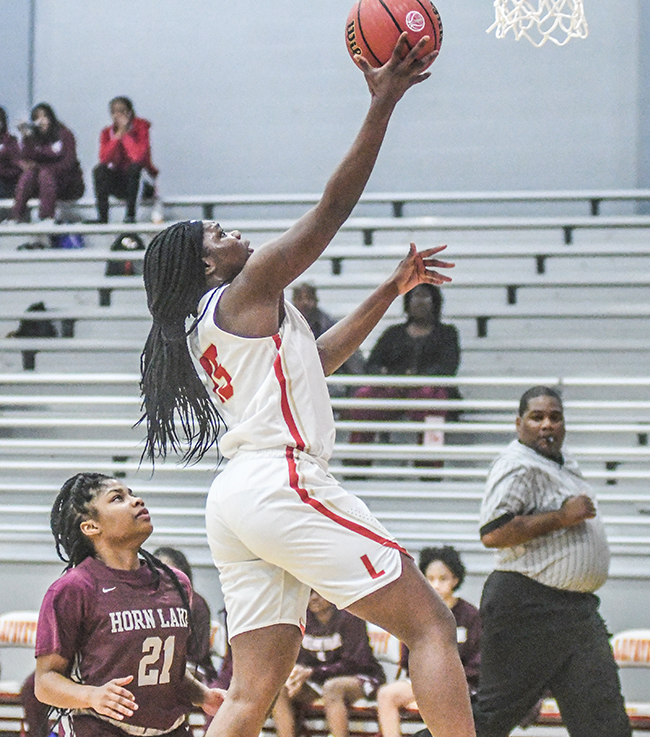 OXFORD – Lafayette was able to overcome one of their worst defensive quarters of the season Tuesday, pulling away from Horn Lake and winning by a final score of 63-49. The Lady Commodores advance to 13-0 on the year.

The Commodores struggled to stop Horn Lake in the first quarter, trailing 19-15 after one. Horn Lake was having great success feeding the ball into the paint and beating Lafayette up on the glass. Defense stiffened in the second quarter for Lafayette, allowing just 7 points. At halftime, the Commodores had taken the lead, 31-26.

“They were more aggressive in the first quarter and they took it to us,” said Lafayette head coach Shayne Linzy. “They were a lot more aggressive on the boards. One of the things we talk about defensively is allowing one shot per possession. They were getting multiple shots all the time.”

Despite the first quarter struggles, Lafayette was in control for the rest of the game. Over the final three quarters of play, they outscored Horn Lake 48-30. The Eagles made another small push early in the fourth quarter, cutting the lead to 10, before a four-point play by Lafayette’s Mariah Holland squashed any chance of a comeback.

Junior guard Kimaya Dixon set the tone offensively for the Commodores in this game. Dixon had 13 points in the first half, carrying the load when the team was struggling. She would score 25 in the game. Junior Azariah Buford and senior Mariah Holland also chipped in with 14 and 16 points, respectively.

Scoring in their traditional half-court offense was a struggle for the Commodores the majority of the evening. They found most of their success running in transition, where they got easy layups off of forced Horn Lake turnovers. Lafayette also did a really good job on the offensive glass, getting a plethora of second chance points in this one.

“To me, I think that’s the best offense in America. Transition and layups and not setting everything up is our gameplan. We are a transition team,” Linzy said. We have some kids that know what to do with the ball in their hands.”

Lafayette continues to dispose of highly rated teams like Horned Lake. At 9-1 entering tonight, Horn Lake was one of Lafayette’s best tests of the season. They have also beaten 14-2 Ingomar twice.

“We have to play every night. And we have a target on our backs,” Linzy said. “We have to show up to play from the tip.”