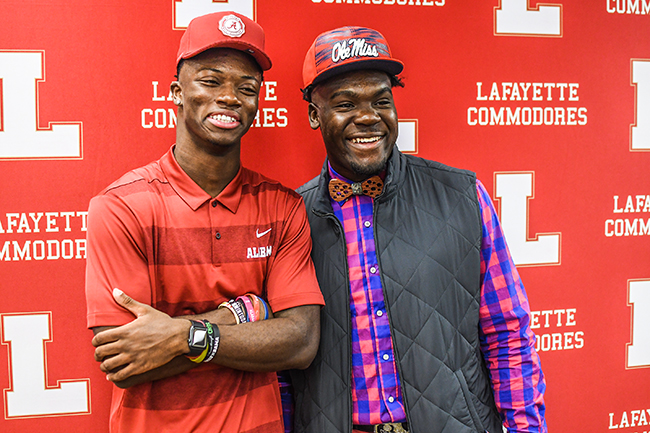 OXFORD – It was a joyous scene from the Lafayette High School library early on Wednesday morning. Kids laughing and smiling, parents gathered around for Brandon Turnage and Eric Jeffries to sign their national letters of intent to go play college football.

Turnage, a four-star defensive back prospect and the seventh rated player in the state according to 247Sports, left no room for ambiguity in his signing. When he walked into the library, he did so donning a crimson Alabama polo. When he sat down at the desk to sign his paperwork, there was only a single cap on the table. Brandon Turnage is heading to Tuscaloosa.

“With Alabama, you know the program, you know the coaches. That’s where I knew I could go and become the best me I could possibly me,” Turnage said. “I can come in and compete with the best because I believe that I am one of the best.”

Alabama gave Turnage their word that he will not redshirt. He will have the opportunity to earn a playing spot, working with one of the best coaching staffs in the country, a staff that has produced countless NFL prospects at his position. Having Alabama head coach Nick Saban show up in your house and walk the hallways of your high school isn’t something many high school kids get to experience, but for Turnage it was a reality.

A versatile defensive back that also played wide receiver at Lafayette, Turnage said he will have the opportunity to compete at the nickel corner, outside corner, safety and wide receiver positions at Alabama. He prefers safety. His goals? They’re lofty. Turnage says he wants to be a Freshman All-American and to eventually win the Jim Thorpe Award, the award given to the top defensive back in college football.

Where Brandon Turnage said he’s ready to get away from Oxford and be out on his own, his cousin, Eric Jeffries, is staying home. Jeffries signed with Ole Miss on Wednesday morning.

Jeffries said the coaching turnover didn’t affect his decision at all. He has talked to new defensive coordinator Mike MacIntyre, calling him a “pretty good guy.” At Ole Miss, with the lack of depth on the roster, Jeffries should have the opportunity to contribute quickly due to his early enrollment. He’ll play inside linebacker for the Rebels.

An Oxford kid, Jeffries said he watched D.K. Metcalf, impressed by how he was able to move from an Oxford local right to Ole Miss. The Oxford High School graduate, Metcalf declared for the NFL draft earlier this month.

“It means so much to the town and to me. I looked up to D.K. (Metcalf) and saw he was able to do it. I wanted to be able to do the same thing,” Jeffries said. “He set the example. He set the standard and the bar is high. I just have to go in and compete and try to set it even higher.”

For a school to have one kid with the opportunity to play college ball is an accomplishment. Having one kid being able to go off to an SEC power is outstanding. But Lafayette now has two, a remarkable achievement for a Class 5A football program in the state of Mississippi.

“I’ve never seen, in my 15 years, guys going to two SEC schools coming off of one football team. It’s an awesome thing,” said Lafayette Athletic Director Greg Lewis. “And they’re great guys too, that’s the thing. They do a great job in the hallways with all the other students. And you have to have those things as well to go to schools like that.”

Neither Turnage or Jeffries will be redshirting and they both believe they have a chance to make an impact early on the national collegiate stage. Lafayette lost to West Point in November, a game that would have afforded them a berth in the Class 5A North Half championship. But for these two Commodores, bigger pastures lay ahead.