Kermit Davis set to return to his old stomping grounds 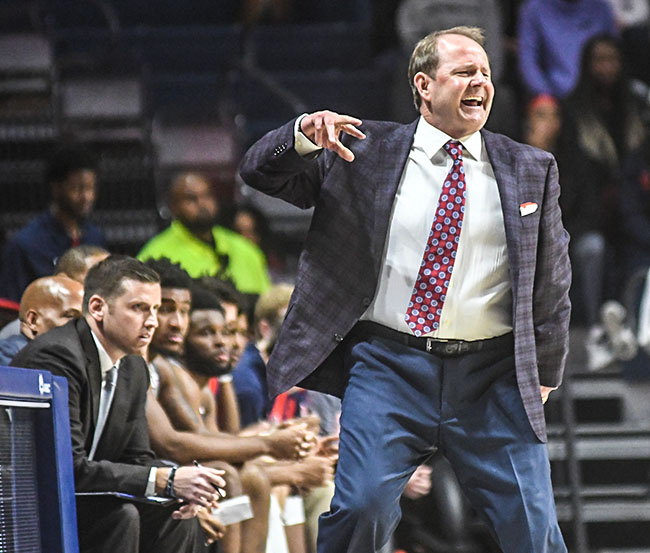 OXFORD – A bit of a bizarre homecoming is in store Friday for Ole Miss head coach Kermit Davis. The Rebels travel to Nashville for a matchup against Middle Tennessee State, the school Davis coached at for 16 years before taking the job in Oxford.

In a diversion from playing at MTSU’s campus in Murfreesboro, Ole Miss will play the Blue Raiders at Bridgestone Arena in downtown Nashville. The game was actually one scheduled by Kermit Davis when he was the head coach at Middle Tennessee. In a lot of ways, it’s a basketball game on a Friday night. But there’s no sugarcoating things: this game is different.

“I can sit here and tell you it’s just another game, but it’s not. I’ve got a lot of sweat equity, our whole family does, with that place. When I look at that stat sheet, it’s like I’m looking at my team,” Davis said. “It’ll be different, but when you tip it up, it all goes away. It’s a competitive game.”

During his 16 years at MTSU, Davis won 322 games and took the Blue Raiders to three NCAA tournaments since 2012. As a 15-seed in the 2016 tournament, his team knocked off 2-seed Michigan State 90-81. However, there’s quite a bit of turnover since Davis left Murfreesboro.

Replacing Kermit Davis at head coach is Nick McDevitt, who spent his previous five years coaching UNC Ashville. MTSU’s two leading scorers from last year, Nick King and Giddy Potts graduated. Three others transferred and much of the recruiting class did not return. In a lot of ways, it’s a team that looks nothing like the one Davis left behind.

“There’s a lot of new faces since we left,” Davis said. “I’ve known Nick. We played Nick’s team in Ashville during the Great Alaska Shootout two or three years ago. I have a lot of respect for Nick and his staff.”

Davis’s MTSU teams played at Bridgestone Arena a handful of times during his 16 years. For Ole Miss, the opportunity to play at Bridgestone isn’t just a valuable neutral site game, it’s a time to familiarize themselves with the arena that will hold this year’s SEC tournament. There’s value in getting used to the locker room and shooting in a new arena, as tournaments do not bode themselves to having a lot of time for adjustments.

Under McDevitt, Middle Tennessee has struggled this year. They are 3-8 on the season entering Friday. A lot of it is out of McDevitt’s control. There’s clearly been significant roster turnover since Davis’ departure and the team has played a very tough non-conference schedule – one that Davis set up. Ole Miss will be the third power-five team in their non-conference slate. MTSU currently has losses to no. 4 Virginia and Vanderbilt, as well as losses to traditional non-power-five powers in Butler and Murray State.

While it is simply another neutral floor basketball game on the schedule, it’s clear that Kermit Davis isn’t really looking at it that way. A lot of fans in the arena Friday are his friends; their allegiance will be split. He’s also appeared on a handful of Nashville talk radio shows throughout the week, shows that he would do regularly when he was the head coach at MTSU. Thursday night, the day before the game, he’ll have dinner at an old favorite in Germantown.

As for Kermit’s daughter Ally, Saturday will be her birthday. Someone that grew up in Murfreesboro, rooting for her dad and the Blue Raiders should be torn on this game. Not according to Kermit. Ally Davis is all about Ole Miss now.

“Oh Ally? She’s Hotty Toddy,” Davis joked. “It’s Ally’s birthday on Saturday. She came into our locker room after the Chattanooga game and she said, ‘guys you got to beat the Blue Raiders.’ She’s definitely with Hotty Toddy on Friday night.”