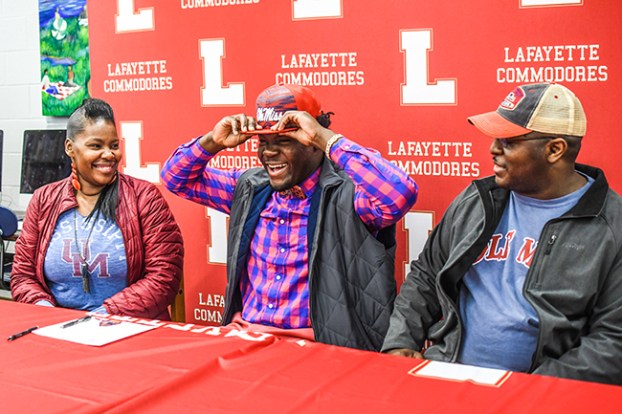 Lafayette High linebacker Eric Jeffries, center, puts on an Ole Miss cap after signing to play football at the University of Mississippi cap as his mother Antoinette Jeffries, left, and Elliott Hilliard look on during National Signing Day in Oxford, Miss. on Wednesday, December 19, 2018. (Bruce Newman, Oxford Eagle via AP)

OXFORD – Highs and lows abound for every program, nationwide, on National Signing Day. Wednesday, high school football players from around the state and country made their college choices. But for head coach Matt Luke and Ole Miss, Wednesday was less about players they missed out on than it was about building depth.

Ole Miss signed 25 players in the early signing window, filling a variety of needs across the board. For the first time since Matt Luke took the reins, the Rebels will have the opportunity to field to a full roster, due to prior recruiting sanctions.

“We’re really excited about this recruiting class. We all know recruiting is about filling needs, and I feel like we were able to address many of those needs,” Luke said. “Overall, being able to sign 25 guys, 16 of whom are from the state of Mississippi… we’re really, really proud of that.”

By day’s end, Ole Miss had landed the 23rd ranked recruiting class in the nation by 247Sports. However, the class ranked only 11th in the Southeastern Conference. The only schools in the SEC that Matt Luke and Co. out-recruited were Kentucky, Missouri and Vanderbilt.

Three, four-star recruits account for the heavy lifting in the Ole Miss class. Darius Thomas, a 6-foot-6, 340-pound offensive tackle from Arkansas is the best offensive line prospect the Rebels have signed since Greg Little. With Little departing for the NFL draft, Thomas should have the opportunity to play immediately for Ole Miss. Dannis Jackson is another one of the four-stars. Luke expects the receiver from Sumrall, MS to be an early contributor due to his ability to make plays with the ball in his hands.

With a team that will be looking for immediate contributions from this class, being able to sign a handful Junior College transfer players was a big win for Ole Miss. Highlighting the four JUCO players in the class is Sam Williams, a four-star pass rusher. Williams, a Montgomery, AL native, was the NJCAA National Defensive Player of the Year in 2018, posting a JUCO best 17.5 sacks and 28.5 tackles for loss. He should fill an immediate starting need for Ole Miss.

Despite the wins and the opportunities to fill depth at just about every position, the Rebel class will be remembered in part for two players in Horn Lake that they didn’t sign. Nakobe Dean, the best player in Mississippi and the nation’s top linebacker, spurned Ole Miss for Georgia. Fellow Horn Lake defender, Rydarious Jones, picked LSU. Both were key targets for the Rebels that said Ole Miss was their second choice. Brandon Turnage, an Oxford native and four-star defensive back from Lafayette High School, also snubbed Ole Miss for Alabama.

A typical full signing class is around 25 players. Ole Miss signed 25 on Wednesday. When all is said and done in late February, expect a class of 30 to 32 players. This is possible due to the recruiting and scholarship sanctions of past that have now been lifted. The class consists of eleven mid-year enrollees that will be in Oxford for the start of spring practice.

“It’s an opportunity for me. We’re getting back to 85 scholarships, and I can put my stamp on the program. And I’m really, really excited to have the opportunity to do that,” Luke said.

Wednesday was just the start of the early signing window. Players have the opportunity to sign their national letter of intent through Friday. Despite much of the signings happening early, the Magnolia State still has some drama to unfold. Two of Ole Miss’ top four verbal commitments, Jerrion Ealy (Jackson Prep) and Jonathon Mingo (Brandon), remain unsigned. The recruiting window will open up again in February, giving players who were not yet ready to commit another opportunity to do so.