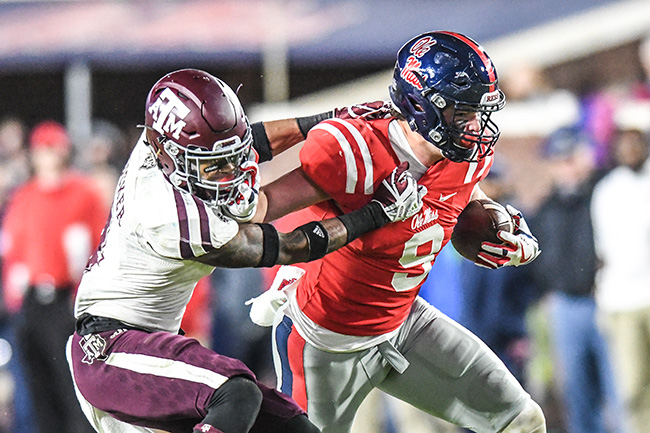 Ole Miss tight end Dawson Knox (9) is tackled by Texas A&M Aggies defensive back Derrick Tucker (4) and fumbles on the play for a turnover at Vaught-Hemingway Stadium in Oxford, Miss. on Saturday, November 18, 2017. (Bruce Newman, Oxford Eagle via AP)

Another Rebel will be leaving Ole Miss early. Tight end Dawson Knox will be forgoing his remaining NCAA eligibility, as he declared for the NFL draft on Saturday morning.

Knox, a redshirt junior during this past season, has already earned his Ole Miss degree. He will join a crew of Ole Miss underclassman, including A.J. Brown, D.K. Metcalf and Greg Little, to declare for the NFL draft. Like the three before him, Knox has the opportunity to be a very valuable draft commodity.

Will always be a Rebel ❤️? pic.twitter.com/cq5GQPB1yZ

To say Knox was underutilized during his time as a Rebel would be a monstrous understatement. Despite being one of the best draft prospects in the NCAA at the tight end position, Knox caught only 15 balls in his nine starts for Ole Miss in 2018, a relatively baffling number.

Once a walk on quarterback at Ole Miss, the now tight end has the opportunity to make himself quite a bit of money in the coming months. According to The Draft Network’s Trevor Sikkema, he’s the 32nd best player in the entire draft. Jon Ledyard has him at no. 29.

“If you told me in five years that he was the best tight end in an unbelievable tight end class I wouldn’t be surprised at all,” Ledyard said.

From the little he was able to show on tape, Knox is a fantastic athlete with good size and great hands. Tight end is a position that naturally takes a while to develop in the NFL, and that will be no different with Knox. Regardless of the outcome in April’s draft, Knox is bound to be a hot commodity.