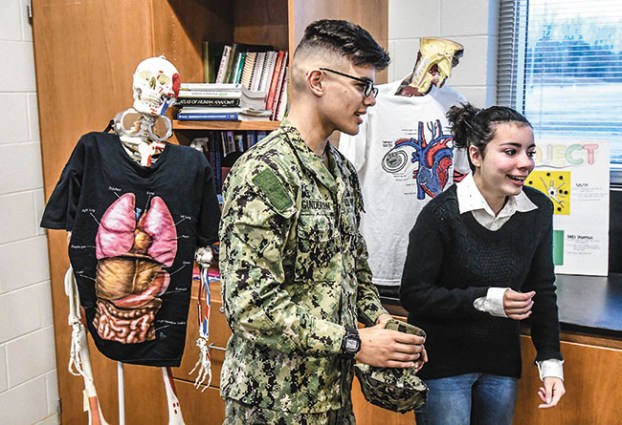 OXFORD — Olivia Gunderson might have a wish list for Christmas, but it will not be needed anymore. The Oxford High sophomore received the only present she wanted this holiday season.

Former Oxford and Lafayette High student Brandon Gunderson returned home from the Navy and surprised his younger sister in her classroom on Friday morning. Brandon, who graduated from Lafayette in May, was awarded nearly two weeks of holiday leave and will get to spend Christmas and New Year’s with his family.

Friday was the first time Olivia had seen her older brother since he graduated earlier this year. Following graduation Brandon went to Great Lakes, Illinois for a two-month stint at boot camp before being shipped to Fort Leonard in Missouri for nine-weeks of training.

Brandon, who is a construction man apprentice with an E-2 designation with the Navy, was informed two weeks ago he would be able to take leave. Once paperwork was filled out and he knew how many days he would get to spend away from Fort Leonard, he began planning the surprise visit. He arrived back in Oxford on Thursday and stayed at a friend’s house to avoid being seen until Friday morning.

The Gundersons are a military family with their father having served. Brandon and Olivia’s dad would frequently surprise them when he’d return from deployment, so Brandon wanted to continue the tradition for his sister.

“It’s kind of surreal,” Brandon said before surprising his sister. “It’s just like being in the same spot (as my dad). It’s just weird seeing it from my point of view.”

The military tradition does not end with Brandon. Olivia is currently a 2nd Platoon Commander with Oxford’s JROTC as well as a member of the color guard.

“The navy is a really big part of my family, so (Brandon) serving our country means a lot,” Olivia said. “He’ll be able to tell me his stories and stuff and I think that is really cool.”

Brandon has one more week of training once he returns to Fort Leonard. From there he will go to Gulfport for combat training. He will then be deployed to California which will serve as his home base. In April he will begin a four-year tour in Japan.

Donna Zampella appointed as interim director of OUT commission

The Oxford-University Transportation commission has appointed an interim director, after the passing of former superintendent Ron Biggs. Donna Zampella is... read more