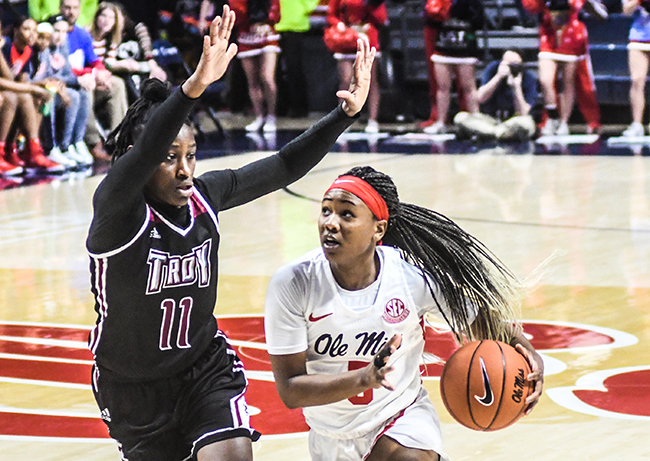 OXFORD – While from a purely scoreboard perspective, Ole Miss’ home loss to Troy on Wednesday was simply a loss, it’s much more. The Troy game was symptomatic of everything that’s wrong with this Rebel team. Ole Miss simply can’t rebound.

Ole Miss lost to Troy by 17, a game where honestly the score was closer than it seemed. Here’s the kicker: they were outrebounded by Troy 53-31.

“I was disappointed, once again with our rebounding efforts. I think that had a lot to do about why we didn’t have success tonight,” said head coach Yolette McPhee-McCuin. “Obviously, we’re struggling in that area. I have to figure out a way to get us a little more tough and aggressive and relentless.”

In all fairness, Troy is one of the better rebounding teams in the entire country. Not Connecticut or Notre Dame or Tennessee. Troy is no. 1 nationally in rebounds per game at 51. and top ten in rebound margin at +11.8. Losing the rebound battle to Troy isn’t the end of the world, but losing it by 22 is a problem.

Coach Yo, as she’s affectionately called, traditionally had teams that rebound exceptionally. For her, that makes these struggles even more difficult. She seems to be taking it almost personally. In her five seasons at Jacksonville, McPhee-McCuin went 50-24 in Atlantic Sun Conference play and was always one of the best rebound teams in the country.

Last year, Jacksonville was 27th in the nation in rebound margin. And for them, that wasn’t a particularly great year. In the 2016-2017 season, Jacksonville was tenth nationally in rebound margin at +8.9. in 2016-2017, they ranked 18th. Where does Ole Miss stand? Through this point in the year, Coach Yo’s Rebels rank 233rd nationally in this stat. On average, they are losing the rebound battle by 2.4 a game.

Different teams look at rebounding differently. For some it’s scheme. But for Coach Yo, philosophically rebounding has to do with want to and toughness. She said you can recruit rebounding. Good news there: Ole Miss already has a commitment for one of the best center’s in the 2019 recruiting class. Tai-Yanna Jackson, a four-star center, is ranked 11th nationally at her position by ESPN.

Until they get those reinforcements, it’s up to this team to work better together to rebound. You can’t just fast-forward eight months. This team still can grow together.

“Right now, we have what we have. We have to really work at trying to get them to want to do their jobs a little bit better as a unit,” McPhee-McCuin said. “Since we’re not individually good at rebounding, we have to find the want to in order to do it as a unit.”