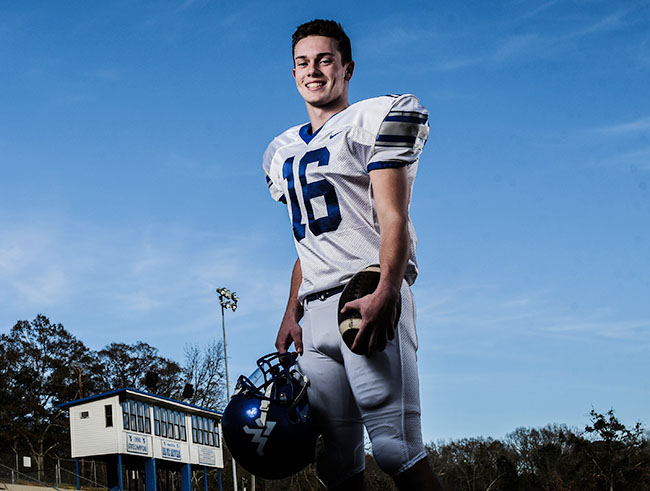 OXFORD — Hollywood might not be able to script the past year at Water Valley better than the actual events that took place. From a 2-win season in 2016 to climbing to the top of the Class 3A mountain for the first time in 28 years, the turnaround began last year and Jacob Truss was firmly in the center of it.

Like a hero desperado waltzing into the saloon the instant after the townsfolk fear all is lost and claim it will take a miracle to save their fledgling western town, Truss waltzed into Water Valley’s locker room right before the 2017 season began.

Now, upon Truss’ arrival it was not as clear he would be one to guide the Blue Devils back to glory as the gunslinger who rolls into town to save the day on the big screen.

“(Truss) showed up right before the season started, so we didn’t know him or anything,” Water Valley head coach Brad Embry said. “He was out of shape, hadn’t ever lifted weights or anything like that. It’s just one of things where he just showed up. You don’t get that very often; show up one year, starting quarterback the next and win a state championship.”

That quick progression of success helped Truss become the 2018 EAGLE Player of the Year and headline the 2018 All-Area Team.

After transferring from Hickory Flat to Water Valley, Truss had a sophomore season where Embry tried to figure out what this newcomer’s role would be. Truss rushed for 107 yards and a touchdown and threw for 58.

Throughout his sophomore season Truss slowly worked his way into steady playing time throughout the Blue Devils’ return to the postseason. There was another obstacle for Truss to overcome this season before leading his team to a state championship. During baseball season Truss hurt his ankle, causing him to miss spring and summer workouts. The injury was severe enough that he was still recovering in the early parts of this season.

Even with an injured ankle, Truss put up monster numbers. He was the team’s second leading rusher with 1,071 yards and 15 touchdowns and he threw for 474 yards and 10 touchdowns. Truss was more of a threat with his legs than his arm, but during the Blue Devils’ playoff run throughout November he became a dual threat where defense had to be prepared to stop either his legs or his arm.

“Last year I didn’t get to run the ball much, but I guess coach Embry knew I had it in me,” Truss said. “When you have an outcome like I thought we were going to have, (the tough runs) are worth it.”

Embry also had situation of two quarterbacks who could provide success on the field in Truss and Blayne Clark. Clark was more successful in the passing game and Truss controlled the ground game. It was a two-quarterback system at the onset of the season but as the year progressed Truss slowly saw more snaps and eventually became the starter.

“If you look at the stats Blayne played most of the time, Jacob played some and he just got healthier and better in shape” Embry said. “The situation played itself out like it did and just very fortunate. Most times it’s hard to find one quarterback and we have two and one just took the bull by the horns and led us to a state championship.”

The running game was the Blue Devils’ bread and butter this season, but Tolbert kept defenses honest all year. The senior receiver was invaluable during the playoffs and saved his best game in a Blue Devil uniform for last. Against Seminary in the MHSAA Class 3A state championship game, Tolbert finished with 4 catches for 100 yards and four touchdowns. Tolbert was the team’s best receiver by a wide margin with 859 yards and 17 touchdowns.

“Bud had good games early in the season with Blayne and we did a good job getting him the ball,” Embry said. “A lot of it thought comes when Jacob is in at quarterback you have to play the run. So, you get better opportunities in the secondary, you get better matchups. He looked better because we were getting more favorable coverages to throw the ball in because of our ability to run the ball better.”

The ability to run the ball better in 2018 was due to Truss’ success but he had a little help from his friends. Rucker was the team’s leading rusher with 1,204 yards and 23 touchdowns. It was the first time the Blue Devils had two 1,000-yard rushers in the same season in at least 10 years

Defense was as much the Blue Devils’ strength this season as their run game. They held opposing offenses from 12.8 points per game and lived in their backfields, racking up 29.5 sacks this season. Murphy led the charger towards the quarterback with eight sacks. Benson had a team-high 167 tackles and Murphy was third on the team with 112. Cook finished with 42 tackles and 3.5 sacks.

The Chargers’ second year in Class 6A was an improvement from their first in 2017. They reached the postseason and hosted their first Class 6A playoff game in program history.

After splitting time with John Reece McClure last season, 2018 saw Meagher become leader of the Chargers’ offense. The junior quarterback threw for 1,575 yards and 14 touchdowns and was the team’s leading rusher with 536 yards and 9 touchdowns on 175 carries.

“John, I thought, got better as the year went on,” Oxford head coach Chris Cutcliffe said. “I think the other guys feed off of John’s confidence and you could see that in some of the close ball games we were able to win in the fourth quarter. John was a huge part of that, being able to lead some nice drives at the end of games.”

Despite missing the final three games of the regular season due to injury, J.J. Pegues was a dual-threat for the Chargers’ offense. The junior had 255 yards and nine touchdowns on the ground along with 346 yards and five touchdowns through the air.

Pegues was constantly a safety valve for Meagher when he could not find an open man downfield.

“The way to sum up J.J.’s role for us is he’s so versatile,” Cutcliffe said. “He does so many different things. Offensively, obviously plays all over the field. He plays as a big impact player for us on special teams and we had just started playing him on defense before he got hurt. His versatility is just so impressive”

DeDe Pegues was the team’s leading receiver with 507 yards and 6 touchdowns off 41 catches.

Defensively, Pearson was one of the key cogs. The junior finished with 56 tackles to go with a team-high seven interceptions, tying a school record for most picks in a season. Person led the Chargers in tackles with 95 and had 4 sacks. White led the team in sacks with 4.5.

Tannehill served as Oxford’s specialist on special teams. The sophomore averaged 37 yards a punt and was a perfect 28-for-28 on point after attempts. Tannehill finished 11-of-16 in field goals with his longest being a 44-yard conversion.

2018 was a comeback season for the Commodores. Coming off their first year in Class 5A and missing the playoffs, they made a run this season to the second round.

The trio of Anderson, Shaw and Stewart was a deadly combination for the Commodores this season. All three broke the 1,000-yard mark easily and combined for 4,005 rushing yards and 45 touchdowns.

In his second season as the starting quarterback, Anderson found his footing by throwing for 1,319 yards and 9 touchdowns his junior season.

“In the offseason we were like if our defensive guys play like we feel like they will and we can play (Anderson, Stewart and Shaw) out of the same backfield then we’ll have something that we don’t feel like anyone else will have,” Lafayette head coach Michael Fair said. “That’s what happened. When (defense) started playing at a high level we were able to keep Jamie and Lance in the same backfield and they just fed off each other all year long.”

The defense was stingy all season due to the play of Turnage, Prather and Clayton. Being a two-way player at times, Turnage rarely saw the sideline. The Alabama signee had a team-high 450 receiving yards and 3 touchdowns on offense while also recording 65 tackles and a team-high six interceptions on defense. Prather was constantly in opposing team’s backfield looking for the quarterback. He found what he was searching for 9.5 times this season. Clayton led the team in tackles with 122.

Dabney was Lafayette’s starting punter and tight end. He averaged 41 yards a punt and caught four passes for 67 yards.