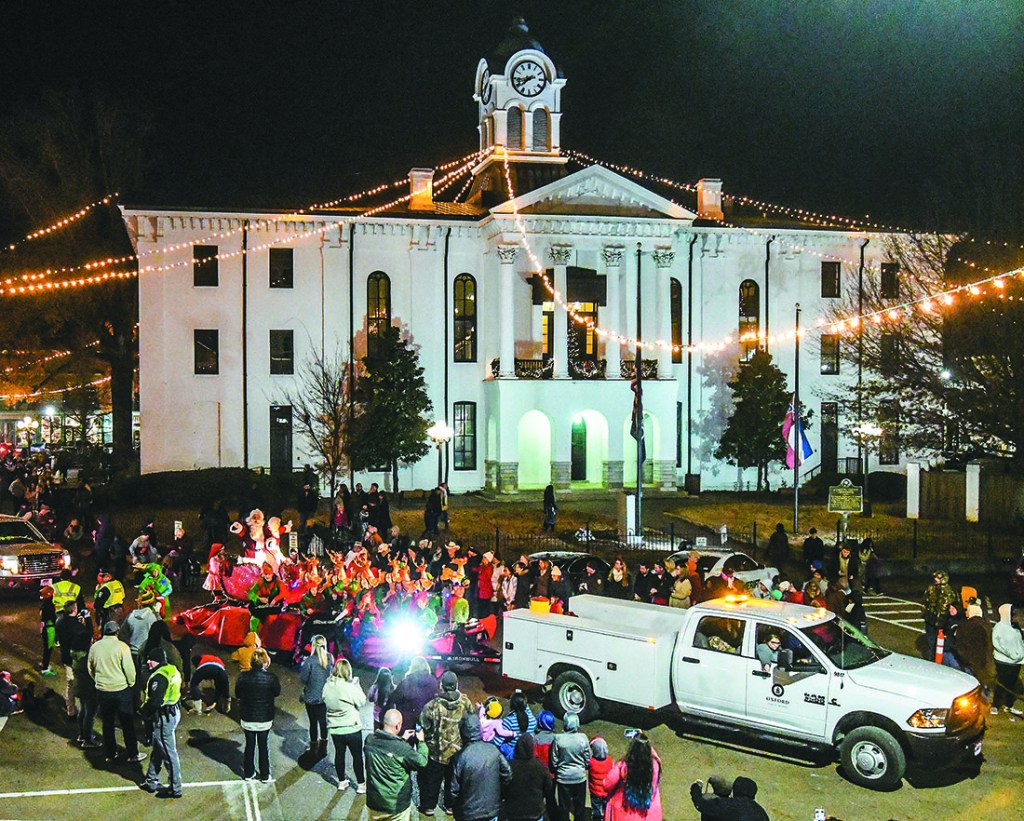 Santa and Mrs. Claus bring up the rear of the annual Christmas Parade in Oxford, Miss. on Monday, December 3, 2018. (Bruce Newman, Oxford Eagle)

Let me preface this by asking you to understand: I have high standards for the holidays, imparted in me by my family.

For those who have yet to meet me, or peruse my Twitter profile, I’m a big city guy through and through.

Prior to moving to Oxford, I lived in Chicago for a year and would take scenic walks up and down State Street or Michigan Avenue, which have more holiday decorations strewn up and down them than most medium-sized villages.

Yet, I can’t help it. I’ve been captivated by Oxford’s holiday scene.

There’s not much time to even fully take it all in, either. I mean, holiday lights and decorations go up for about a month and a half every year. After New Years, it’s back to normal.

You have to appreciate the aesthetic and grandeur of it all, sure, but only recently I’ve been able to put my finger on why the square has captured my snow-filled, Chicago heart.

Seeing Oxford’s canopy outstretched over the square, with the historical buildings decked from top to bottom in holiday beautifications, gives me a nostalgic feeling I’ve seen a million times before.

It’s just a scene that I’ve never been able to see in reality.

To this day, my grandma sets up a holiday-themed village every December. Numerous porcelain sets make up the larger village that she puts up every year in her front room, which depicted a full city that basks in holiday cheer.

The village has porcelain homes, dotted with creative festive decorations. There’s a police department, aptly dubbed Snow Village PD; a fire department to fend off fantasy fires; a chapel with a radio tower across the way; and numerous stores where the shoppers buzz about.

This village is so complete, it even has it’s own porcelain Starbucks. Seriously.

It wasn’t until this weekend, circling around the courthouse for what had to have been a half dozen times, that I realized that I’m living in this village.

The cold slap of nostalgia made me forget how much I miss living in a giant city.

Sinking into Chicago’s chaotic buzz really does give you a bold feeling, and if you’re like me, you’d hear Frank Sinatra’s words echo in the back of your head.

But being a part of the bustle means you’re just one of the many. In Oxford, there are literally less than a million and a half of people than Chicago. But, it’s much easier to savor the holidays here.

The holidays aren’t just a part of the bustle; they’re a part of an endearing lifestyle. One that I’ve admired since I was a child, with my grandma walking me though each part of that porcelain village that I’ve placed myself in every time I pay her a visit.

All that’s missing is the snow.

Where to find Santa Claus in Oxford this weekend