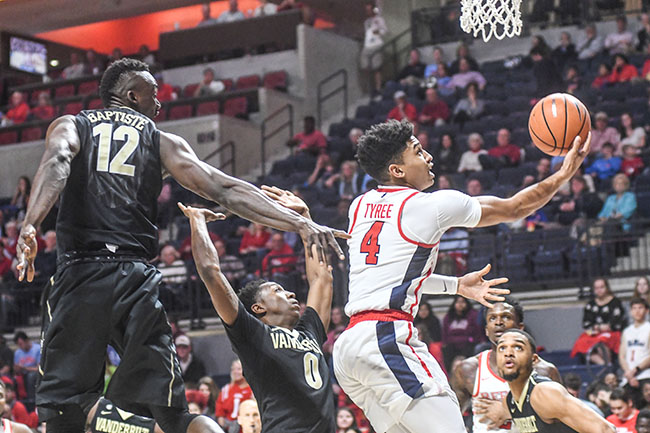 NASHVILLE – Breein Tyree is red hot. Tyree’s not just running a mild fever hot or food right out of the oven hot. After his last two games, Tyree is a scorching Arizona summer hot, and the Rebels are the beneficiary. Right now, as Tyree goes, so does Ole Miss, and that’s a good sign for the Rebels with less than a week remaining before SEC play.

“Breein is at a high level. Breein is playing as good as any guard in the SEC right now,” head coach Kermit Davis said Friday after the team’s win against Middle Tennessee. “He’s got the loudest voice in our gym every day. He works his tail off. He’s our best vocal leader. I think good things happen to guys that do that consistently over a long period of time.”

Tyree says he’s tried to be that vocal leader from the minute he stepped on campus three years ago. Now a junior, and with the production to back it up, people are actually listening.

“I just (wasn’t) as detailed as I am now,” Tyree said. “I’ve just got a bunch more experience. With a new coach coming in and challenging a leader to step up, I’ve just stepped up to the plate.”

His play has almost an artistic feel, and the last two games have been Tyree’s Sistine Chapel. Recently. against Chattanooga and Middle Tennessee, both double digit wins, Tyree led the Rebels with 20 and 24 points, respectively. He did so shooting 68-percent from the field and 70-percent from three. His shot is pure and right now it’s hitting at an unprecedented rate.

“I’ve just been trying to take advantage of every shot. The shots that I’m taking are normally good shots in Kermit (Davis)’ offense,” Tyree said. “I work on it every day and the ball’s going in so good things are happening.”

Since Davis came in, Tyree has done more than just use his mouth more, he’s changed his entire body composition. Last year he played at around 204-pounds. Now he hovers around 192. He says the changes have given him more speed and makes him feel more in control.

“He’s lost a lot of weight and he’s changed his body. And I think he’s really just matured,” Davis said. “He had a semester where he had like a 3.5 (GPA) this fall. All that just combines for good vibes and good karma on the floor.”

It’s been a long road to this point for Tyree. As a senior in high school, back in 2016, Tyree tore the ACL in his left knee. Nowadays, he’s been fully recovered form that knee injury for years. While he says it’s something he never thinks about anymore, the time on the bench helped him become the player he is today: one of the best guards in the SEC.

Eleven games in to the season, Tyree is on more than just a two-game hot streak. As a junior, he’s playing the most minutes he’s ever played. He’s notching career bests in literally every statistical category from points and shooting percentage to rebounding and steals.

Terence Davis was the team’s only pre-season awards nod, as a preseason-all SEC second team nod. However, after not being listed on any pre-season poll or watch list, it’s Tyree that is on pace for an All-SEC year. Tyree’s 17.6 points per game is third among all SEC players.

By advanced metrics, Tyree adds 6.35 points per game for Ole Miss compared to a NCAA average player, one of the best individual player marks in the Southeastern Conference. Additionally, he’s an above average SEC defender according to adjusted defensive metrics, a pretty good achievement for a 6-foot-2, undersized shooting guard.

As the vocal leader Tyree has helped the team get off to one of the best starts in recent memory. Ole Miss has now run six in a row. One non-conference game remains, Saturday at home against Florida Gulf Coast. A win against Eagles would get the Rebels to 10-2, the first time since the 2015-2016 season Ole Miss was at 10-wins entering the New Year.