Walk-on quarterback to NFL tight end: A look at Ole Miss’ Dawson Knox through the lens of an NFL evaluator 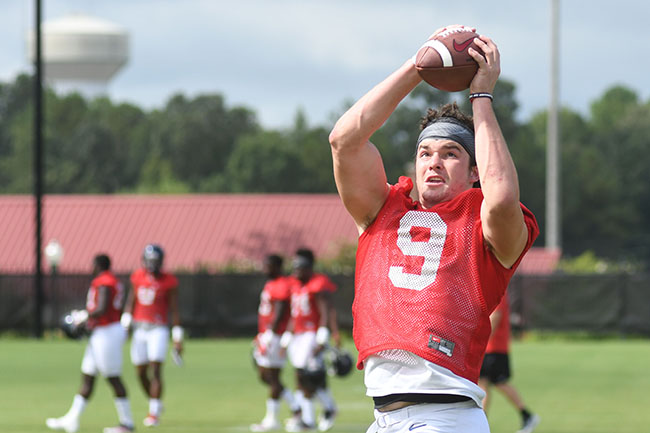 OXFORD – For all the flaws of the Phil Longo offense, flaws that we’ve examined repeatedly in conjunction with red-zone struggles and route pattern concepts, Dawson Knox may have been Longo’s biggest casualty.

Knox, who is widely believed to be one of the top, if not the top, tight end drafted in April’s 2019 NFL Draft, caught just 15 balls in the Ole Miss system in 2018. Last year, he caught just 24 passes. However, Knox wasn’t utilized because he was incompetent. He was underutilized due to a fatal lack of in-breaking routes and middle of the field concepts in the Phil Longo offense.

“Dawson Knox is out here running wide open every game. It’s almost comical to watch. He’s waving his arms and just sitting in the middle of the field,” said Jon Ledyard of The Draft Network. “(Jordan) Ta’amu doesn’t even think to throw to him but that’s not what he’s asked to do.”

With Ole Miss now behind him – Knox declared for the draft this past Saturday – Knox no longer has to worry about any inadequate team tactics. He was once a walk-on quarterback at Ole Miss and then an underappreciated tight end. However, he may soon be a hot NFL commodity. For now, Dawson Knox only has to worry about himself.

The NFL Draft is incredibly complex, yet very simple. The process is imprecise and teams unpredictable, but one thing always stands out. Pure, unadulterated athleticism sells. A combine held in late February will bring together the top prospects to work out in front of all of the NFL teams. Players will run a 40-yard-dash, jump and go through extensive interviews and physicals.

In many ways, the draft process is not sexy: it resembles more of a parade of horses going to auction than a job interview. However, for some players like Dawson Knox, it’s a critical part of the process. Knox is a freak athlete for his size and he catches the ball really well in a limited sample. At a position where few players are NFL ready, his God-given athleticism will be a hot commodity.

“Hardly any tight ends that are worth anything come to the NFL ready to hit the ground running. It hardly ever happens,” Ledyard said. “You’re not ever getting fully developed tight ends. So you have to draft athletes and develop them.”

Ole Miss has had a good bit of tight end success recently. Evan Engram, the Rebel standout from 2013 to 2016, was drafted no. 23 to the New York Giants in the 2017 NFL Draft. Due to his Oxford namesake and NFL success, it’s easy to compare Engram with Dawson Knox, yet they are simply different players.

Engram came into the league as the rare, established tight end. His first year with the Giants, he recorded 722 receiving yards and 6 touchdowns. However, unlike Knox, he was used quite a bit in the Ole Miss offense. Engram caught 65 balls in his senior year at Ole Miss and 162 in his college career. Knox has 39 career receptions. Engram’s usage made him much more pro-ready than Knox, but that doesn’t exactly mean they don’t have similar upside.

“Knox is very different from Engram. He was used in a lot of the similar ways, but not really as polished as Engram was as a route runner,” Ledyard said. “But you still see the flashes (with Knox). Good ability to slow into breaks and get out of breaks quickly and separate. He catches the ball really well the few times in his life that he’s been targeted.”

Ledyard would continue to talk about how he believes in Dawson Knox’s upside, but that it’s a talented class of college tight ends as a whole, not exactly something you’d want to hear if you’re in Knox’s camp. But wait, he would circle back.

“There are some good moments on tape and some bad moments,” Ledyard said. “But if you told me in five years that he was the best tight end in an unbelievable tight end class I wouldn’t be surprised at all.”