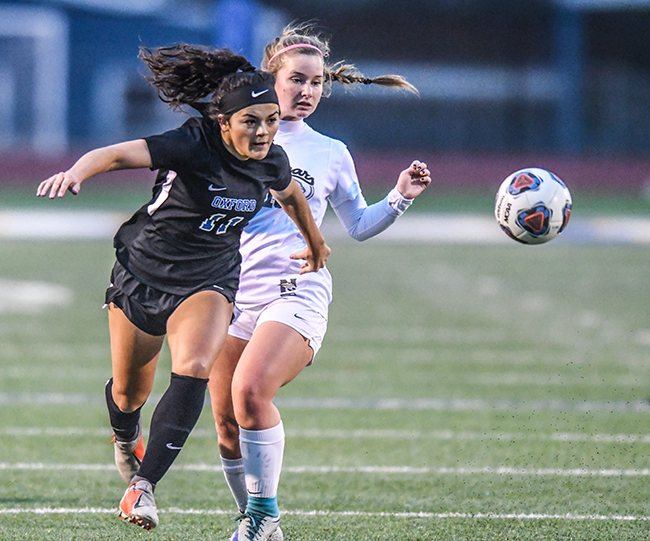 Winter break and the turn of the New Year marks a strange mid-season point for high school winter sports. Most teams take will go nearly two weeks between games, giving players time to heal up over the holidays, but also allowing rust to form. At (or near) the midway point of the winter sport calendar, let’s take a look at where Oxford and Lafayette teams stand, with some notes or quotes from the coaches.

Without sugar coating anything, the team simply isn’t very good. On a positive note, at least senior forward Stephon Isom is fun to watch. Despite erratic play, the 6-foot-7 forward is averaging 14 points and eight rebounds per game.

Led by three upper classmen in Kimaya Dixon, Mariah Holland and Azariah Buford, the Lafayette girls might be the best team in the state. “We have a target on our backs,” said head coach Shayne Linzy.

The team has played a tough schedule yet is still at .500, winners of three of their last four by a combined score of 11-1. At 1-0 in their division, they’re still alive.

Like the girls basketball team, they’re one of the best in the state.  Since losing to Oxford on Dec. 4, the team is 3-0 winning by a combined margin of 24-0. It’s truly a remarkable run for the Commodores. “Sometimes losing a game is good, because it makes you go back to the drawing board to see how you’re going to fix it,” said head coach Melinda Scruggs.

Riding a six-game winning streak into winter break, the Oxford boys are in a really good place right now. They lost a close game to 13-2 Pontotoc in November then got blown out by Center Hill, the number one team in the state before their win streak began. No shame in that loss.

The Oxford ladies experienced a pretty impressive turnaround from early this year. After starting the season 0-3, Oxford has won 10 of their last 11 games. Their only loss over that stretch was to 13-0 Lafayette.

Despite the 10-4 record, the boys enter the new year in a bit of a downward turn, losers of three of their last four matchups. Regardless of the outcome, they’re still very much alive. To be fair, the Chargers don’t shy away from playing tough teams – their recent 1-0 loss came at the hands of Northwest Rankin, the no. 5 team in the state.

Currently ranked no. 4 in the state, the Oxford girls are yet to lost to anyone from Mississippi. Their only loss came at the hands of Gulf Breeze (Florida) in a game they were leading 2-0 at the half. “When you have your foot on someone’s throat, you have to put them away,” said head coach Hunter Crane.

Walk-on quarterback to NFL tight end: A look at…