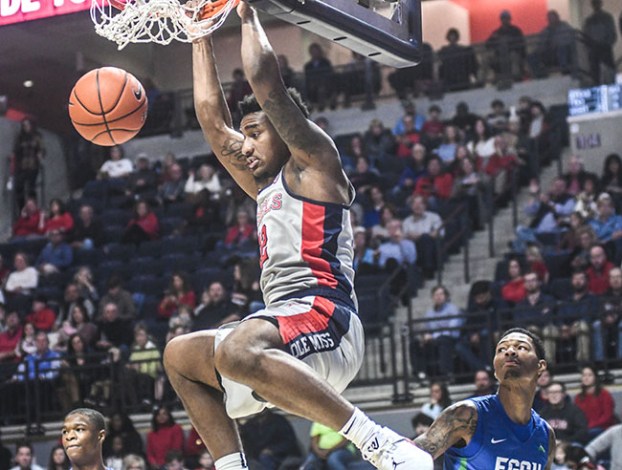 OXFORD – There was never any doubt at the Pavilion on Saturday. The Ole Miss men took an early lead on Florida Gulf Coast and never looked back, winning by a final score of 87-57. The win puts them in double digits, entering the new year and SEC play at 10-2.

“I thought our energy level tonight was really good to start the game,” said head coach Kermit Davis. “I think we’re improving and getting better. Our team has to continue to make a ton of progress over the next two months.”

Unlike recent wins, where the Rebels started out slowly before a second-half surge, Ole Miss came out shooting from the start on Saturday. Starting at the 14-minute mark, Ole Miss outscored the Eagles 35-19 to end the first half.

They never took their foot off the pedal. The Rebels struggled in recent wins letting inferior teams hang around. However, tonight they stepped their foot on the Eagle throats to start the second half. Ole Miss opened the half on a 14-6 run, outscoring FGCU 43-31 in the second half in route to the 30-point victory.

Individually, Terence Davis led the way for Ole Miss, scoring 20 points and grabbing 6 rebounds. However, it was one of the more balanced attacks of the season. Aided by the 12-25 mark from the 3-point line, seven different players scored five or more for the Rebels. Five scored in double digits.

“I just thought the ball moved. A lot of times in the second half, it wasn’t really a set offense. It was just guys playing,” Davis said. “They played so unselfishly. It was really fun to watch. I’m really proud of that part. That’s the reason we keep shooting around 50-percent is the ball moves.”

Three Rebels, K.J. Buffen, Blake Hinson and Devontae Shuler, left the game in the second half with apparent injuries. Thankfully, Davis believes the team dodged a bullet. None of the injuries appear major. He expects all three to be ready to go come the start of SEC play.

Ole Miss opens SEC play Saturday Jan. 5 in Nashville against 8-3 Vanderbilt. The Commodores are without their best player, freshman point guard Darius Garland, who is out for the year with a knee injury. Even without Garland, Vandy is still a dangerous team, having recently beat no. 17 Arizona State by 16.

Winter break and the turn of the New Year marks a strange mid-season point for high school winter sports. Most... read more