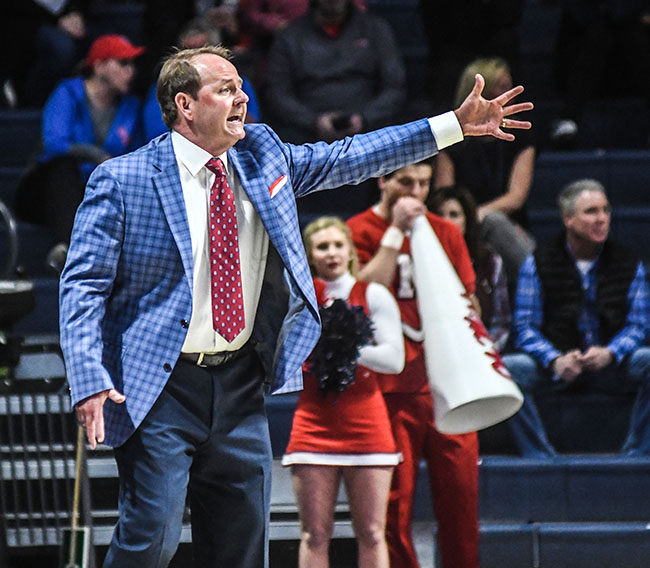 Ole Miss closed non-conference play at 10 wins for the first time since 2015, quite the impressive start for the first year of the Kermit Davis era. Now they enter conference play, an SEC with four teams ranked inside the AP top-20. Ahead of opening night Saturday against Vanderbilt, we will preview each of the SEC opponents on the Ole Miss schedule alphabetically, in a two-part preview over the course of the next two days.

Avery Johnson’s Alabama team is right in the middle of the SEC’s second tier hodgepodge. Below the four ranked teams (Tennessee, Auburn, Kentucky and Mississippi State), there are eight teams with a record between 8-4 and 10-2. It’s a very balanced Crimson Tide team with eight players averaging over six points per game, led by freshman guard Kira Lewis Jr. and his 15 points per game.

The team has played just two games against power five teams, both at home. The Tide beat a 7-3 Arizona team 76-73 on Dec. 9 and a 6-6 Penn State team on Dec. 21. However, their three losses are to Northeastern, Central Florida and Georgia State. Alabama ranks no. 55 according to ESPN’sBasketball Power Index (BPI), just ahead of Ole Miss’ 59, and no. 63 according to Kenpom, and advanced team efficiency metric. Ole Miss is no. 48 by Kenpom.

At 9-3, Arkansas has played by far the weakest non-conference slate of any team in the Southeastern Conference. Their best win was against now, no. 21 Indiana – a 73-72 home win. Outside of Indiana, the only power five teams they have played are Texas and Georgia Tech, both losses. ESPN tracks strength of schedule: Arkansas ranks no. 301 in SOS among 353 Division I schools. No other SEC school ranks below 225.

The Razorbacks are led by three players averaging over 13 points-per-game. Sophomore forward Daniel Gafford is third in the SEC in scoring with 17.5 points and is also second in the SEC in rebounds per game with 9.3. Like Alabama, Arkansas is firmly in the middle of that second tier in the SEC. Interestingly, they rank no. 93 in the nation by BPI but rank no. 57 in Kenpom, likely do the poor strength of schedule.

It took a few years, but Bruce Pearl has brought the Tigers back to national relevance. The former Tennessee coach took the Auburn job in 2014, going 44-54 in his first three years, before a breakout campaign last year with a 26-8 year. Now at 10-2, Auburn is no doubt one of the SEC’s top team, and a team with national importance.

Senior guard Bryce Brown leads Auburn in scoring with 15.3 points per game, but four different Tigers are averaging double figures. Both Tiger losses come to ACC foes, losing to no. 1 Duke 78-72 in the final of the Maui Invitational and North Carolina State 71-78 on Dec. 19. The NC State loss was the only true road game for Auburn on the year. Auburn ranks no. 9 nationally by BPI and is no. 12 by Kenpom.

Florida boasts the best defense in the Southeastern Conference through twelve games, holding opponents to just 61.9 points on average. Defense is critical for the Gators, as they only score 71 points per game on average, no. 13 in the conference. The four losses are all to legitimate teams – no. 17 Florida State on the road, Oklahoma, Butler and no. 10 Michigan State. They also got to revenge the Butler loss, dominating them 77-43 at home to end the non-conference slate.

Unsurprisingly based on the listing of prior games, Florida has played the strongest non-conference slate in the SEC, no. 41 nationally. They will be the team most prepared for the upcoming conference schedule. The team ranks no. 4 in the conference in BPI at no. 21 and even better in Kenpom at no. 16. According to Kenpom, the Gators have the no. 6 defense in the country.

In his first year at Georgia following a nine-year run at Indiana and a stint with the media, Tom Crean has made Georgia into the toughest interior force in the SEC. The Bulldogs are the best rebounding team in the conference at 43.2 rebounds per game (no. 7 nationally) and are no. 4th in country with 6.25 blocks per game.

A pair of sophomore forwards are the key to Georgia’s success. Nicolas Claxton leads the SEC with 10.2 rebounds per game and his 13.3 points per game is second on the team. Rayshaun Hammonds leads the team with 15 points per contest and his 6.9 rebounds is second on the team. In reality, Georgia isn’t a great offensive team. They lack the guard play to succeed on that end, hence their no. 140 rating on offense by Kenpom. As a whole, the team is no. 97 in BPI and no. 100 by Kenpom.

After getting embarrassed by Duke 118-84 on national television to open the year, Kentucky has flown under the radar and is a surprisingly good team entering conference play. Since the Duke loss, the Wildcats have won 10 of their last 11, the only loss coming to Seton Hall by a score of 84-83. This team could’ve quit on coach John Calipari after the Duke game; if anything, they’ve come back hungrier.

It’s one of, if not the most, experienced teams the Wildcats have had under Calipari. Of the top-four Kentucky scorers, only two are freshman. Like many of the other teams discussed, the team is very balanced. Those top four scorers all average between 12.6 and 16.4 points per game. Despite the embarrassment to start the year, Kentucky is no. 15 in BPI and no. 13 by Kenpom.

Georgia loss caps up and down bowl season for…