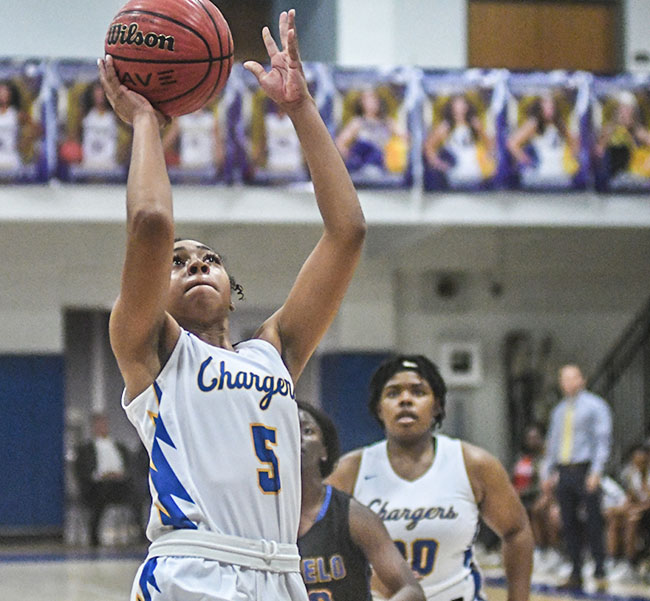 OXFORD – In their first regional matchups of 6A play on Friday night, the Oxford boys and girls lost two close games with Tupelo, each dropping both to 0-1 in regional play.

The Oxford boys held the lead for the majority of a the first half. They led Tupelo (9-7, 1-0 in Region 2) 13-11 at the end of the first quarter and 28-24 at the half. But it was a game that they never really seemed to be able to deliver the knockout blow, allowing Tupelo to hang around. The second half was a back and forth game, with Tupelo finding a way to pull away in the final three minutes of play, winning 52-48.

“I thought we were in attack mode for about three quarters. We really were,” said head coach Drew Tyler. “When it was tied or we had the lead, we played different. When Tupelo got the lead, we got a little passive on defense. We just didn’t make good decisions the last half of the fourth quarter.”

Charger big man JJ Pegues was dominant at times on rebounding the ball, but also disappeared for stretches on the glass. He was forced to sit during a critical moment late in the third quarter and early in the fourth quarter with foul trouble, allowing Tupelo to gain some momentum.

“He can play in the paint and score from the three-point line,” Tyler said. “It opens lanes for our guards. Sitting him hurt us on the offensive end. But we got to shore some other things up.”

Both teams struggled shooting free throws on the night. Oxford went 4-15 from the free throw line and Tupelo didn’t hit a free throw until mid-way through the third quarter. This is a critical flaw both teams are going to have to fix down the stretch.

“It’s huge red flags with those missed free throws,” Tyler said. “There’s some things they can do to soften their shots. They need to get to the line, relax and put an arch on the ball. They have to give themselves a chance for the ball to go in.”

Friday’s loss for Oxford marked the first of two meetings with Tupelo and their first game within their division for both schools. The two schools will meet again on Jan. 25 in Tupelo.

“I’m proud of our effort. That’s what I told the girls,” said head coach Cliff Ormon. “We definitely proved that we could play with a very good Tupelo team, but we have to find a way to win it.”

A sloppy first half consisting of 43 attempted free throws never allowed any team to get a rhythm early. Oxford jumped out to a 19-13 lead at the end of the first quarter. A small Tupelo run to end the second quarter brought the score to 30-25 Oxford at the half.

“It wasn’t the prettiest game. When the first quarter ended, I said ‘let’s go’ like it was halftime already. It seemed like it had been that long of a game,” Ormon said. “There were ten fouls on both teams at the end of the first quarter, so I knew it was going to be a long half.”

Tupelo came out red hot in the third quarter. Four straight three-pointers by Tupelo’s Jalancia Kohiheim and an and-one by Che’maya Carouthers capped a 20-12 run to start the half by Tupelo. The high scoring quarter saw the teams combine for seven three-point baskets. Despite the strong Tupelo run, Oxford held their own, entering the fourth quarter up 50-47.

The Lady Chargers would struggle in the back-and-forth fourth quarter. Turnovers plagued them down the stretch, as Tupelo would go on to win by a final score of 66-65. Oxford had a chance at the buzzer, but it was not enough. Junior guard Saniah Campbell would lead the game in scoring for Oxford with 20 points. Tupelo’s Jalancia Kohiheim would finish with 29.