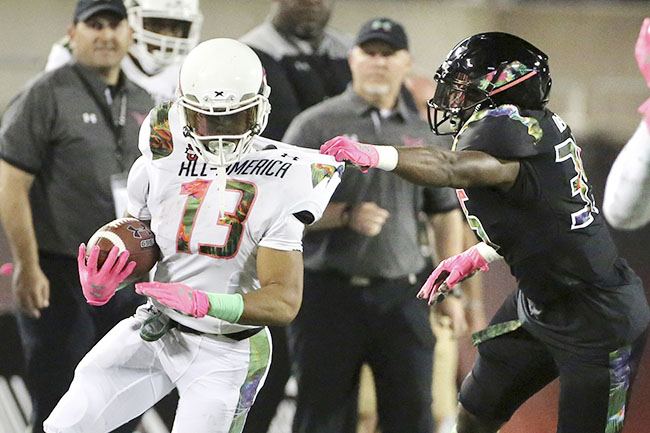 Team Flash running back Jerrion Ealy (13) is grabbed by Ballaholics defender Ken DeLoach (35) during the Under Armour All America Game in Orlando, Fla. on Thursday, Jan. 3, 2019. The all-star game features top high school prospects from across the United States. (Joe Burbank/Orlando Sentinel via AP)

Thursday night in Orlando brought together 109 of the best high school football players in the country for the annual Under Armour All-American Game. In a game featuring abundant talent and endless promise, Ole Miss’ future talent was front and center.

For a lot of these players, Thursday night was the stiffest competition they’ve ever faced. Everyone that plays in the All-American game is a sort of hometown hero – they’re used to being the best player on every team they’ve been on since Pop Warner days. Understandably, some can shrink playing against other standouts for the first time. Jerrion Ealy thrived.

In a losing effort, the Ole Miss running back commit carried the ball 16 times for 119 yards and two touchdowns Thursday, setting the Under Armour All-American game record for rushing yards. He showed both power to run through defenders and breakaway speed during a 39-yard touchdown run. He also caught a would-be touchdown off of a wheel route but was unable to get his feet down inbounds.

Ealy and Marcus Washington, a wide receiver committed to the University of Texas, shared co-MVP honors in the game. Ealy wasn’t the only Ole Miss commit to play in the game. He was joined by two, fellow four-star receivers in Dannis Jackson and Jonathan Mingo. Jackson has signed his letter of intent and, like Ealy, Mingo is still just a commit.

Thursday’s performance makes an already tough decision for Jerrion Ealy even tougher. Despite his status as one of the best high school running backs in the nation, he’s just as good, if not better, at baseball. Ealy is ranked as the no. 18 draft eligible player on MLB.com’sprospect watch. If he enrolls in Ole Miss instead of going pro in baseball, he is likely to play both sports. He is one of only four players to ever be an All-American in both baseball and football.

247sports lists the Jackson Prep product as a four-star recruit and the no. 4 ranked running back in the country. Ealy has been committed to Ole Miss since December of 2017, but is yet to sign his national letter of intent. He also holds offers from Mississippi State, Clemson and Alabama, among others.