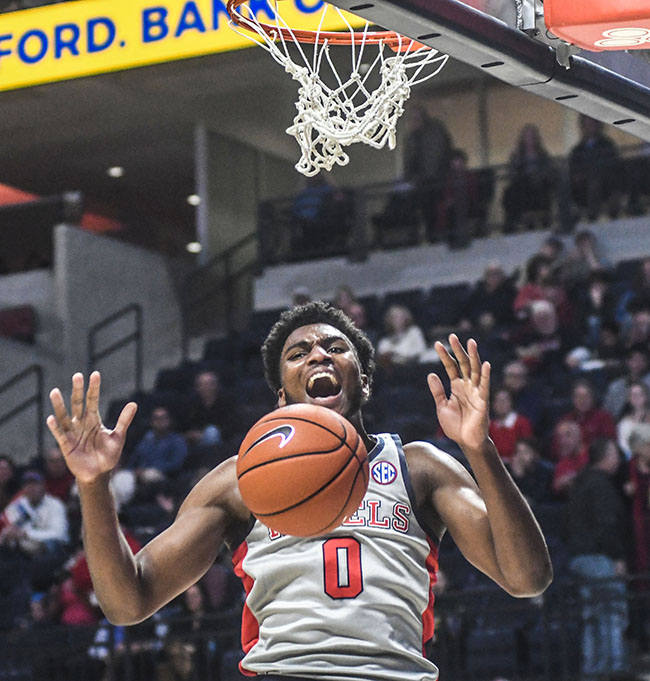 OXFORD – As Ole Miss opens conference play Saturday on the road at Vanderbilt, they’ll be relying heavily on the play of two true freshman. Forwards Blake Hinson and K.J. Buffen have played big roles for the Rebels thus far, both averaging over 20 minutes per game, but Saturday night will be a different animal.

The Rebels have made a point of playing away from home, playing two true road games at Butler and Illinois State as well as four other neutral site games. However, nothing can really prepare these freshmen for the feeling of a true road game within conference.

“They have to understand the physical play, night-in night-out that’s fixing to come. Blake’s got to rebound the ball better. K.J.’s got to make better decisions with the ball,” said Ole Miss head coach Kermit Davis. “Nothing’s really the same as a league game. You just hope all the physical practices, all the game simulation’s that we’ve had in practice and the experience they’ve got prepares them for Vanderbilt and all the road games to come.”

Last season, this was an Ole Miss team that was downright pitiful on the road. Despite going 1-10 on the road last year, junior guard Breein Tyree believes this team has guys that like playing road games. However, he also thinks that for the young guys, it’s something you just have to learn on the fly – there’s no real way to prepare yourself for that environment.

“There’s a lot of noise and a lot of distractions. The preparation is the biggest thing,” Tyree said. “You can’t really tell (the freshman) too much. It’s going to be their first experience. I remember my first experience excited me. I was nervous. I’ll let them have their own reaction to it and they’ll learn as the year goes on.”

The Commodores lost their top player back in November to a knee injury. Freshman point guard Darius Garland, who many see as an NBA lottery pick, hurt his meniscus over a month ago. But this Vanderbilt team has played well without him, going 5-2 after Garland’s injury.

“They lost the game that he got hurt against Kent State,” Davis said. “After that they regrouped. Their two losses are against two really good teams. Kansas State in Kansas City and then NC State was a top 15 or 20 team… their biggest key is the guy who replaced Darius Garland is playing at a really high level.”

Garland was replaced in the lineup by sophomore Saben Lee. Lee was playing a good bit before Garland’s injury but is now the primary ball-handler for Vandy. His breakout game came just before the turn of the New Year, scoring 25 points of 8-9 shooting in a 95-76 win over Tennessee State.

The most talented Commodore is freshman five-star forward Simisola Shittu. Averaging 14.4 points and 7.8 rebounds per game, Kermit Davis called Shittu one of the best, young, big passers I’ve seen. Additionally, Davis pointed out the importance of shutting down Vandy in transition. In losses, teams have been able to limit Vanderbilt transition points. Taking care of the ball for the Rebels will be key.

Ole Miss will take the floor in Nashville riding a seven-game win streak. Playing at Vanderbilt’s Memorial Gymnasium is a bit of a shock for anyone, with an elevated court and benches on the baseline instead of the typical courtside. Seeing how the new-look Rebels respond to their first SEC road test should be exciting. The game takes play Saturday at 7:30 p.m. on SEC Network.