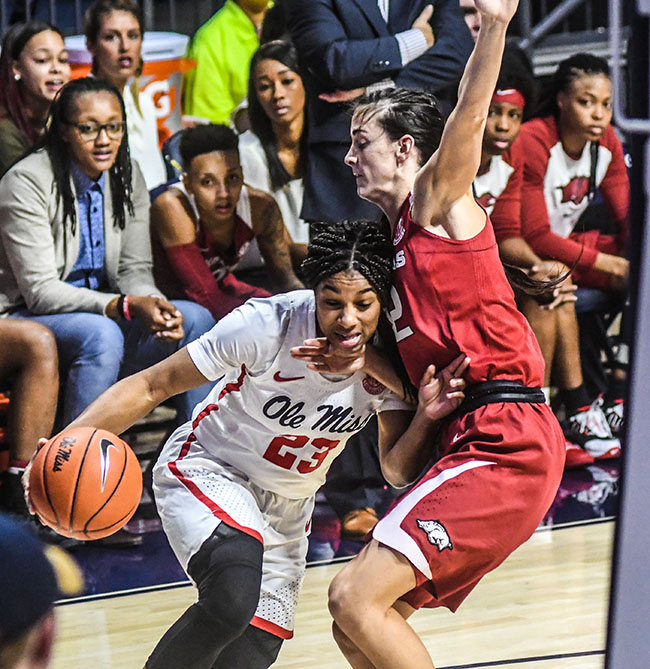 OXFORD — Yolette McPhee-McCuin notched career win No. 100 last month but will have to keep waiting for her first Southeastern Conference win. Arkansas defeated Ole Miss 85-55 in the Rebels’ conference home opener at the Pavilion on Sunday.

Much like their conference opener at Missouri last Thursday, a good first quarter was followed by a poor second quarter and put the Rebels in a hole the remainder of the game. After scoring only six points against Tigers, Ole Miss (6-10, 0-2 SEC) scored 12 on Sunday but an 8-0 run midway through the second quarter fueled Missouri’s 25 points and gave them a 42-25 lead at halftime.

“We take a look at it and we try different combinations,” Yolette said of the second quarter struggles. “We’ve switched it up and tried different combinations but I think we just get worn down. I have some ideas for the next game to try and see if I can keep us a little bit more fresh and we’ll see if that works.”

Despite shooting 47 percent in the final quarter it was not enough to overcome the 33 percent shooting in the first half. Three-point shooting never really warmed up either for the Rebels, who finished 3-of-15 (20 percent) from behind the arc.

Crystal Allen led the Rebels with 13 points, La’Karis Salter scored 11 points. Gabby Crawford and Mahogany Mathews had four points each. Matthews and Taylor Smith got the start for the second straight game, giving the pair of freshmen their first two career starts and coming at the biggest part of the season.

“The message is you got to play hard and you got to be tough and you have to be competitive,” Yolette said. “The reality is that we don’t’ have a consistent group bringing everything to the table. But here’s what I know. I know the people that I’m starting are bringing effort and intensity. I feel like that that’s what I can ask for and expect right now.

The Rebels stay at home with a game against LSU on Thursday at 7 p.m.