Q&A with Under Armour All-American defensive back Brandon Turnage 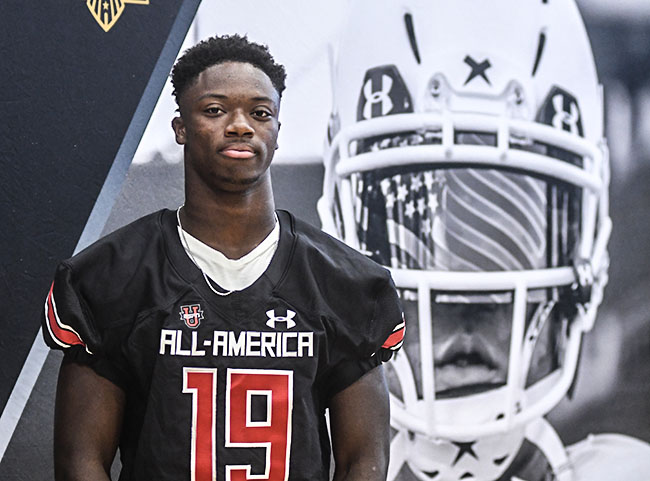 Lafayette High's Brandon Turnage has been selected to play in the Under Armour High School All-America Game. Turnage was presented a jersey during a ceremony in Oxford, Miss. on Monday, September 17, 2018. (Bruce Newman, Oxford Eagle via AP)

Lafayette High School’s Brandon Turnage got the opportunity last week to play in the Under Armour All-America Game. A collection of the top high school football talent from around the nation gathered in Orlando, Fla. for the game, coached by NFL Hall of Famer Deion Sanders and nine-year NFL head coach Steve Mariucci. Turnage started at corner for Mariucci’s ‘Flash’ squad in the losing effort.

Q: How was your overall experience from finding out you were selected to going and playing in the game?

A: “It was fun. It was a once in a lifetime experience, getting to go up against the number top competition in the nation. Just being out on the field at the same time as all the other top players is something I’ll never forget.”

Q: How was it working with those coaches, Deion Sanders and Steve Mariucci?

A: “I wasn’t on Deion’s team, so I didn’t get to interact with him much. Mariucci was a really good, laid back coach. He was very calm and chill and he knew his football.”

Q: How much actually football knowledge did you learn, or was it more just for fun to you?

A: “We learned a ton of stuff in position meetings and the practices leading up. It wasn’t a just-for-fun game. We were competing hard and we wanted to win.”

Q: Was it nice to have that time to get to meet other guys, meet some of your future Alabama teammates?

A: “I knew a lot of the guys, just from the process and taking visits and stuff like that. But, we actually hung out a lot up there. My roommate was Joseph Weté who was signed to Oklahoma to play outside linebacker, but it was good getting to meet other guys.”

Q: How was the level of competition for the game and the practices?

A: “It was next level. This was something that I had never done before. It’s completely different than competing with guys from around the area. The routes and stuff like that – these guys know how run those perfectly. They know the field really well and they can adjust to the ball really well. It’s the small stuff that they do that makes them better. It gets me excited to head to Tuscaloosa.”

Q: What’s the one thing about this in-between moment, after high school and before heading to college, that you’ll remember the most looking back?

A: “The relationships that I have built with the recruits and people going elsewhere for school is cool. We got to build a small little bond in a small matter of time.”