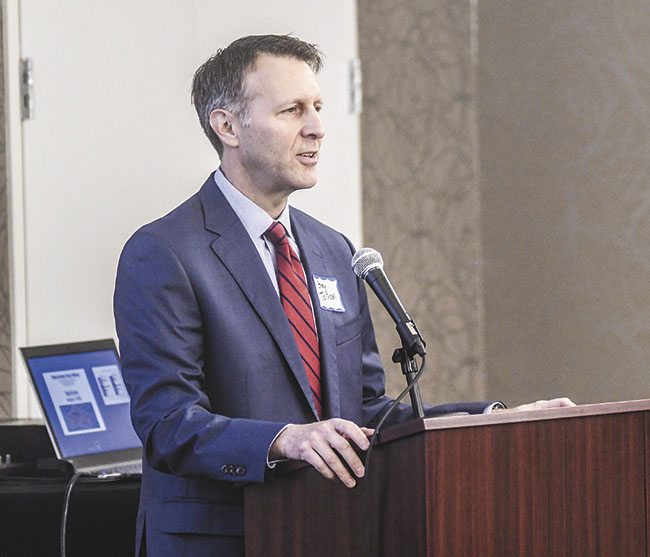 State senator Gray Tollison announces this will be his last year in the legislature during the Oxford-Lafayette County Chamber of Commerce's annual Eggs and Issues legislative breakfast at the Courtyard by Marriott in Oxford, Miss. on Monday, January 7, 2019. (Bruce Newman, Oxford Eagle)

State Senator Gray Tollison announced during the Eggs & Issues legislative breakfast that 2019 would be his last year as a state senator, as he would not be running for re-election in District 9.

Tollison, who owns a Juris Doctorate from the University of Mississippi, has served as the state senator in District 9 since 1996.

“After serving in the State Senate since 1996, I have decided not to seek re-election after the term ends this year,” Tollison said in a statement. “I appreciate the support and trust the voters placed in me over the past 6 elections.  I am proud of efforts during my legislative service to improve education and the quality of life in our community and our state.”

Had he decided to run for re-election, Tollison would have been running against Lafayette County District 1 Supervisor Kevin Frye, who announced his candidacy for state senate on December 28th as the Democratic candidate.

Should another candidate emerge for the District 9 State Senator seat, they would need to be 25 years or older, be a qualified elector and resident of the State of Mississippi for four years and be a resident of the county or district a candidate is planning to represent for two years.

Frye joins Jeff Busby as the two supervisors seeking office elsewhere in the 2019 election cycle, as Busby announced his candidacy for Circuit Clerk in mid-December 2018.

This left two supervisor seats up for the taking, and candidates have emerged to run for these seats.

Brent Larson, the president of the Lafayette County School Board who also owns the Cash Saver grocery store, announced his candidacy for the Supervisor District 1 seat.

“TOGETHER-We CAN Make Lafayette County EVEN BETTER!!” Larson wrote on his Facebook page.

Larson is currently running unopposed, however that could very well change in the coming weeks as candidates finalize their paperwork to run.

This has been the case for the District 2 Supervisor’s seat, Busby’s old seat.

Currently, there are three candidates qualified to run in District 2: Larry Gillespie, J.E. Ed Neilson and Ava Halon Bonds Gossett. Neilson and Gossett are both registered as Democrats, meaning the two will square off in a primary election on August 6th before the general election on November 5th..

However, those will be the only two supervisor seats featuring new faces.

Rikard is the only one who currently has competition, as Dale Timothy Gordon also filed for paper work to run for the Supervisor District 3 seat as the Democratic candidate.