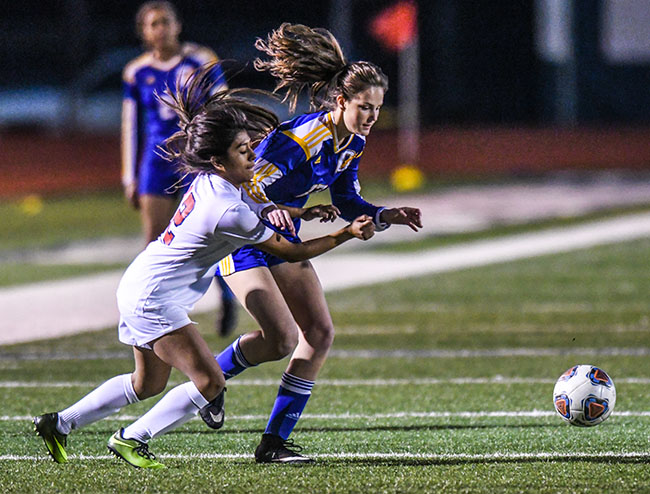 OXFORD – For the second time on the year, Oxford girls soccer strolled out and dominated South Panola from start to finish, winning their first game after the winter break by a score of 12-0. The win takes the no. 5 team in the state to 13-1-1.

“What we want to get out of a game like this is to come out with good rhythm and to get our feet back under us. That’s what we did,” said head coach Hunter Crane. “We had a good response, and the girls were excited to get back on the field. It felt good.”

By beating South Panola for the second time, the Chargers gained a stranglehold on their division, moving to 3-0 against division teams. Only one division team remains on their schedule, a game at Tupelo next week.

“That’s our goal every year, to be first in the division. It doesn’t matter if they’ve struggled thus far you still have to go through South Panola to do that,” Crane said. “We wanted to attack, and we came out here and scored a goal in the first few seconds of the game. They were excited to get back on the field and put a division team away early.”

The blowout gave the girls an opportunity to not just shake off the rust, but to get valuable playing experience for the young second stringers on the Charger roster. Future Ole Miss Rebel Morgan O’Connor scored three times in the game, but nine different girls got on the board at least once, showing the team balance.

“You want your first team to go out and do their thing, but it also gives you the opportunity to coach up some younger girls and get them some playing time in an actual district game. That’s what we did tonight,” Crane said. “To be able to make the little adjustments and see how the younger girls stepped up was good to see in a game like this.”

Despite the less than stellar competition from South Panola, the Chargers will be tested soon. Following a Thursday night game against Southaven, Oxford will travel to Brandon on Saturday to take on the no. 2 team in the state, 12-2-2 Brandon. That game will give them a real show of where they are on the season.

“I think we’re ready. We wanted Brandon to be far enough after the break where we have our feet under us but not close enough to playoffs that we’re beat up,” Crane said. “Brandon is a really good physical team that will be a playoff type game. I think we’re ready. We’re clicking really well right now. As long as we keep everyone healthy we should be.”

Lafayette girls dominate while boys fall at home to…