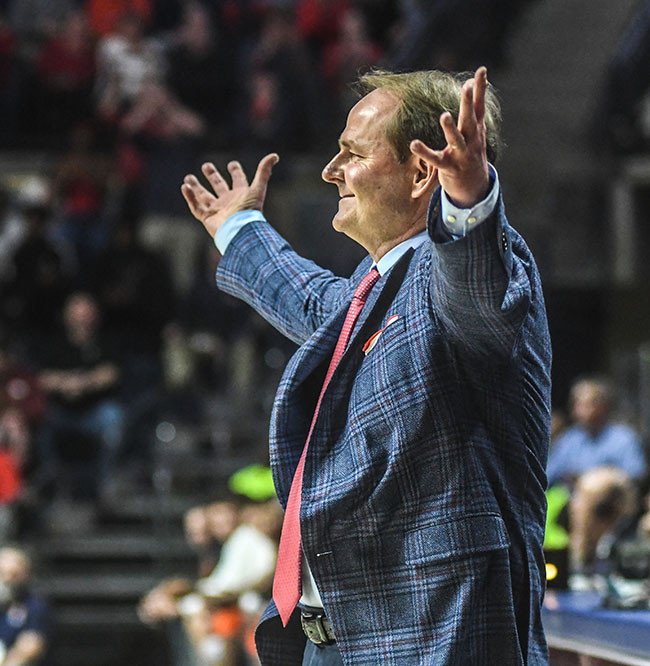 Mississippi head coach celebrates as time runs down on the clock against Auburn at the Pavilion at Ole Miss, in Oxford, Miss. on Wednesday, January 9, 2019. Mississippi won 82-67. (Bruce Newman, Oxford Eagle via AP)

Everything below should be prefaced by saying that I am what many people consider the worst kind of sports fan. Growing up in the Raleigh-Durham area, I moved to Austin midway through elementary school. I root for Duke, Texas, the Carolina Panthers and the Houston Astros. Anything you could say, I’ve already heard it.

Here’s my point: good basketball is really fun. I get that basketball is sort of a tertiary sport in Oxford, really in Mississippi as a whole. But when it’s good, it can be truly captivating. North Carolina is a rare, basketball-first state. When you grow up in the research triangle between Raleigh, Durham and Chapel Hill you’re inevitable convicted into rooting for North Carolina, NC State or Duke. The rebellious kid in me with no familial ties to either became a Blue Devil.

Wednesday night in The Pavilion was a fun basketball experience that I grew up with. The over 8,000 people in the arena were loud and were standing the entire final two minutes when Ole Miss upset AP no. 11 Auburn, winning by 15 points.

Kermit Davis’ team plays a brand of basketball that is more like 2000s basketball than the one-and-done, individual over team basketball that many of the top programs seem to play now. Ole Miss is likely never going to have the top, recruited talent in basketball. The one-and-done players that go straight from nine months of college to the NBA are likely not going to step foot in Oxford. But that’s okay. The brand of basketball I’ve gotten used to watching Duke this decade, from Kyrie Irving to the 2015 National Championship team to today’s Zion Williamson experience sport is exhilarating. However, it’s far from the only way to win in college basketball.

Today’s Ole Miss plays two freshman regular minutes, but is a team dominated by experienced players. In the upset of Auburn, a pair of freshmen, Blake Hinson and K.J. Buffen, played valuable roles. However, they combined for just 45 of 200 team minutes. It’s a team controlled by upperclassmen playing big roles, a formula that’s shown successful of late on the national stage. The 2018 Villanova title team started four upperclassmen. All five starters on the 2017 UNC title team were upperclassman. Kermit Davis’ formula can win.

Through all the talk and the buildup and excitement, I should clarify one thing for Ole Miss fans: let’s curtail the NCAA Tournament talk for now. Yes, wednesday’s upset over no. 11 Auburn is a big step in the right direction. However, it takes a handful of those wins before the team is even on a bubble that doesn’t even exist in early January. In 2018, the SEC sent a conference record eight teams to the tournament, but to expect that number every season is simply a fallacy.

It’s certainly not impossible for the Rebels to make it. However, they probably need to get to 10 or 11 conference wins to be in the conversation. At 2-0, the team has to go at least 8-7 from here on out, an SEC schedule that contains five remaining games against ranked teams and seven remaining road games.

Ole Miss basketball has been fun this year and based on the state of the Pavilion on Wednesday, people are beginning to notice. That said, it’s still tough sledding for the Rebels, and it starts Saturday at no. 14 Mississippi State. For now, Ole Miss has beaten just one ranked team. Let’s keep the tournament talk to a whisper.

Football coordinators introduced: what to expect from Mike MacIntyre…