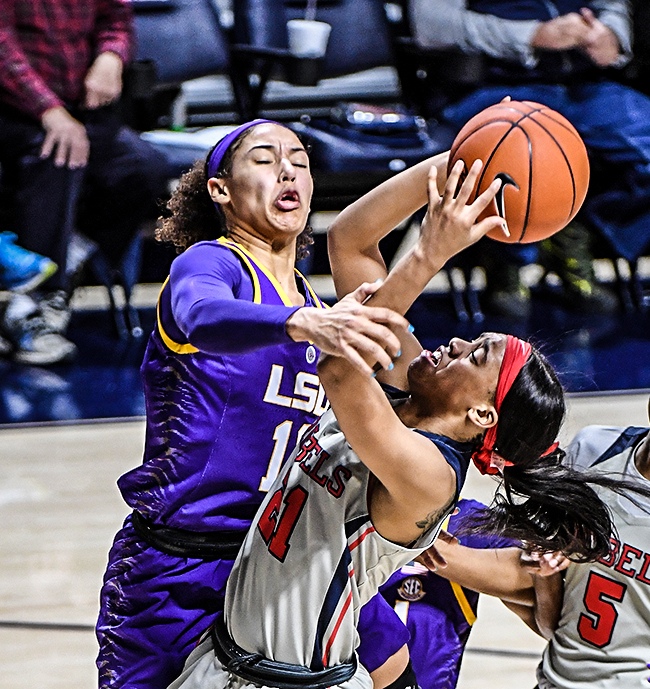 OXFORD – Ole Miss lost a different kind of game Thursday night, dropping 41-55 to LSU in a game that was about as controlled and deliberate as any they’ve played this year. The loss brings Ole Miss down to 6-11 on the season and 0-3 in SEC play.

“That was a rough one,” said Ole Miss head coach Yolette McPhee-McCuin. “This is the SEC. One thing I’ve learned in three games: this is like the Hunger Games. You’re either going to eat or get eaten. I respect it and that’s what I love about the challenge. I look forward to continuing to compete.”

LSU plays a bog-it-down style of basketball. They want to play slow, limiting opponents’ shot attempts and possessions. They know they’re not the best offensive team in the SEC so they’ll use most of the shot clock and win playing defense. That’s exactly what happened tonight.

“We fouled a lot, and that game them the lead,” Yolette McPhee-McCuin said.“If they get a lead, it’s hard to come back.”

For Ole Miss, it’s a team lacking basic roster depth and talent. Coach Yo has said that everyone in the starting lineup outside of redshirt senior Crystal Allen, who averages a team-high 18.3 points, and redshirt freshman Mimi Reed, who runs the team from the point, are interchangeable. Slow games like this, when a winner often comes down to simply who can make their limited number shots, can be their best chance to win in this conference.

The problem tonight was simple: they didn’t make those shots. Ole Miss kept it close through one quarter, trailing just 7-10 at the end of the first quarter. But LSU pulled away in the second quarter, taking a 32-15 lead to half. In the end, Ole Miss shot just 12-40 from the floor and 3-18 from the three-point line.

Ole Miss opened the second half with a bit more vigor. They shot 50-percent in the third quarter and held the Tigers to five points, cutting the deficit to 29-37 entering the final period of play. It would never get closer than nine, with LSU winning by a final score of 41-55. In the end, Ole Miss shot just 12-40 from the floor and 3-18 from the three-point line.

“Night in and night out we see them make those shots,” McPhee-McCuin said. “My two guards went 2-15 (from three) and they got open looks. Are they getting sped up? Probably. Are they hesitating? Yes.”

It’s been a rough start to SEC play for the Rebels. Following Thursday night, Ole Miss is now 0-3 in conference play and 6-11 on the year. Their three SEC losses are coming by an average of 22.3 points. The road doesn’t get any easier, as they travel Sunday to play no. 16 Kentucky.