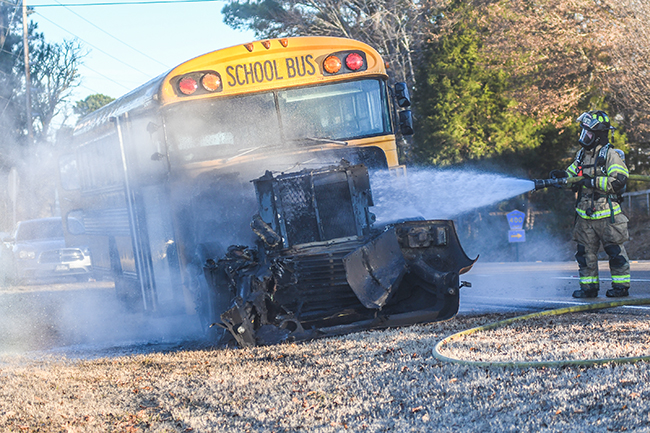 Oxford firemen spray water on a Lafayette County School District bus after it caught fire on Highway 334 outside the schools in Oxford, Miss. on Thursday, January 10, 2019. (Bruce Newman, Oxford Eagle)

OXFORD — Students arriving to Lafayette High School had a traumatic start to their day on Thursday.

Lafayette County School District bus No. 70 caught fire as it was approaching the high school on Highway 334 at approximately 7:30 a.m. The fire was centered on the engine block as students exited the rear of the bus after it pulled off the road directly in front of the school.

There were zero injuries sustained due to the fire or during the evacuation of the bus as every student exited safely. Oxford Police rerouted traffic while the Oxford Fire Department worked to get the fire out.

The school day resumed as normal about an hour after the incident.