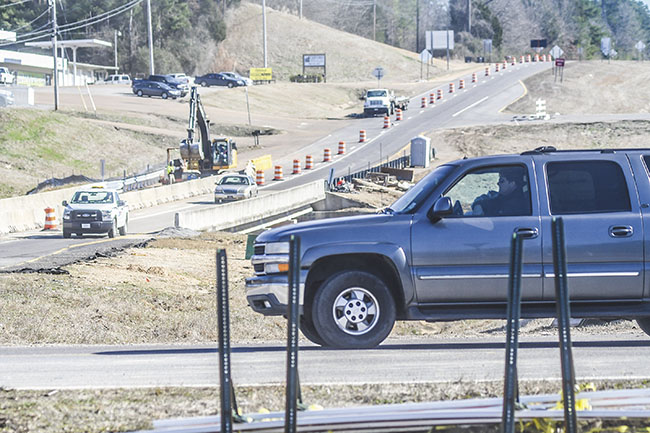 Work continues on two bridges on Highway 6 East in Oxford, Miss. on Thursday, January 10, 2019. The the Mississippi Department of Transportation has announced that the crossover on Highway 6 at the Brittany Woods Subdivision will be closed for approximately 8 weeks beginning Friday, January 11 while work is completed on the bridges. (Bruce Newman, Oxford Eagle)

OXFORD — Traffic flow on Highway 6 will be hindered for the next couple months due to bridge maintenance, according to the Mississippi Department of Transportation.

The Highway 6 crossover at Cannon Road — the Brittany Woods subdivision — and the next crossover immediately to the east will be closed starting today due to work on the bridges in between them. MDOT announced the closures on Thursday.

The crossovers are closed off due to safety issues as they are within 200 feet of where the work will be done and where the beginning of traffic will be tapered to the outside lanes.

The project, which will also cause both the eastbound and westbound inside lanes of Highway 6 to be closed for about 8 to 10 weeks, will work on erosion control under the bridge and provide preventative maintenance. An approach slab began to show signs of erosion and created a gap, which pen up between the slab and the bridge itself.

Despite December being one of the wettest months on record for Mississippi, the project was one that had been pre-programmed according to MDOT Public Information Officer Jace Ponder. The recent rain is also part of the reason for the projected length of time the project will need to be completed.

“It’s very timely to be doing the work,” Ponder said. “(10 weeks) is on the high end. It’s all weather depending because some of the work will be under the bridge. If the water is high or if it’s too soggy to get down there it may delay things a little bit. So, 10 weeks is what we’re looking at.”