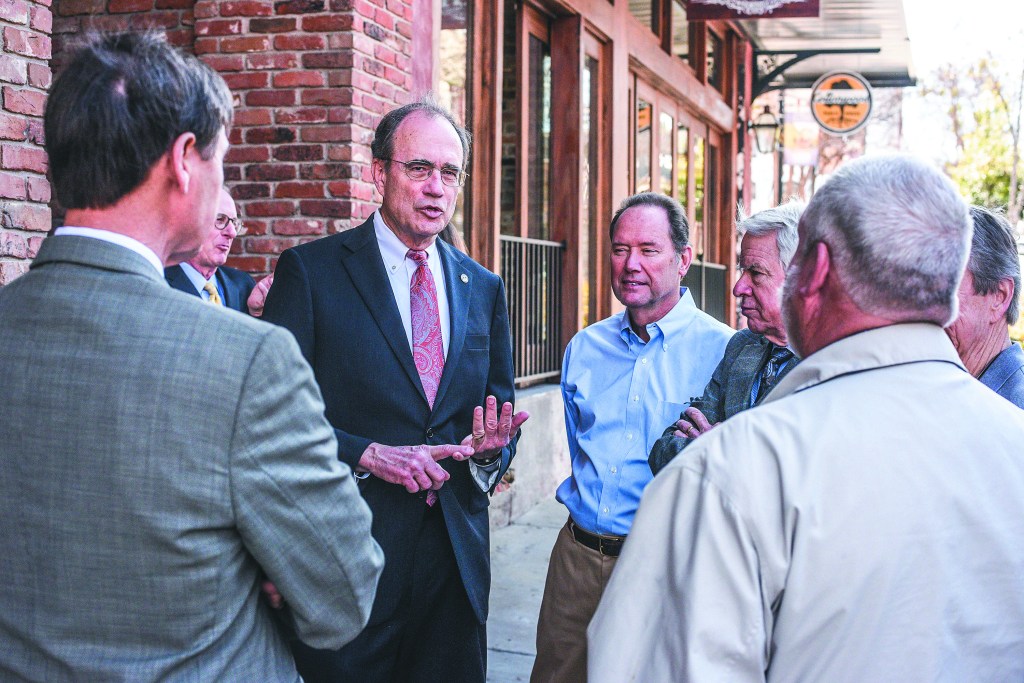 Mississippi Secretary of State Delbert Hosemann greets people in Vicksburg, Miss. to announce his plans to run for Lt. Governor on Tuesday, January 8, 2019. Lt. Gov. candidate Jay Hughes has called upon Hosemann to resign his office of Secretary of State while he is also running for Lt. Governor so that he is not in charge of overseeing an election in which he is participating. (Courtland Wells/The Vicksburg Post)

Mississippi Secretary of State Delbert Hosemann announced his candidacy as the Republican candidate for Lt. Governor Wednesday, and on Thursday his opponent began taking shots.

Jay Hughes, an Oxford resident who announced his candidacy for Lt. Governor months ago, released a statement calling for Hosemann to resign as the Chief Election Officer in Mississippi.

In a release, Hughes, the Democratic candidate, wrote to Hosemann asking him to step down due to a divided political environment.

”Popular confidence could be undermined because you will be overseeing the election in which you are a candidate for one of the highest offices in the state,” the release said Hughes wrote to Hosemann. “This conflict, on its face, is contrary to the most fundamental principle of elections – that an independent and impartial election authority manages the electoral process.”

Hosemann did not respond to an email asking for comment by the story’s deadline.

In the release from Hughes, the Democratic candidate claims Hosemann spent public dollars while in office promoting his name and likeness through email, internet, radio, television and in polling places.

This kind of claims, along with others, brings the Lt. Governor election closer to a rather notorious election from the 2018 election cycle.

This contention is reminiscent of the most recent Gubernatorial election in Georgia, where the incumbent reached his term limit and could not run again.

The final elections came down to Brian Kemp, the Republican candidate, and Stacey Abrams, the Democratic candidate. Kemp won 50 to 49 percent, but not before the race delved into more controversy.

Kemp was Georgia’s Secretary of State throughout the election cycle, and refused to resign from his position, even as former President Jimmy Carter and others implored him to resign.

After allegations of voter suppression and irregularities of voter registration, Kemp won the Governor’s seat and resigned as Secretary of State two days after winning the election.

The release from Hughes also claims Hosemann has the final say in election disputes, which brings the Lt. Governor election closer to the Georgia Gubernatorial race.

There are no current claims against Hosemann of voter suppression.

“This is no different than getting to be the judge and jury in your own trial,” Hughes wrote to Hosemann.

The race for Mississippi’s Lt. Governor is assumed to be a close race, however Hosemann already has support from high-profile Mississippi politicians.

“Delbert has my support on his bid to be Mississippi’s next Lt. Governor,” Mississippi Governor Phil Bryant tweeted. “I look forward to any assistance I can provide to his campaign.”