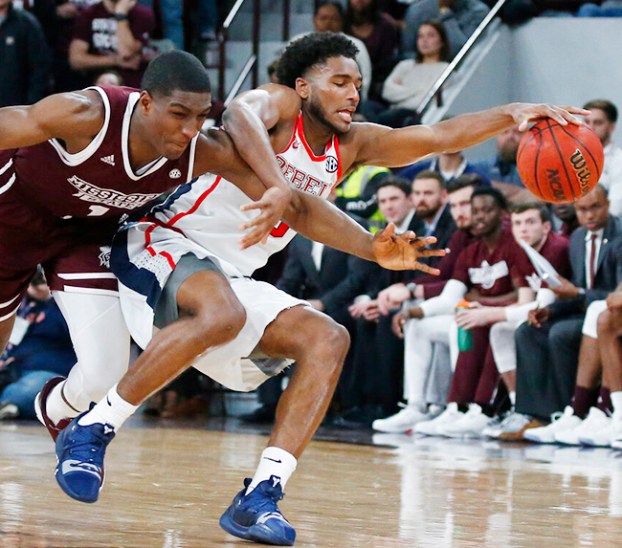 STARKVILLE – Coming off their biggest win of the year, Ole Miss waltzed into Humphrey Coliseum against a rival with heads high. Battling through first half adversity, Ole Miss shocked AP no. 14 Mississippi State on their home floor, winning by a score of 81-77. After being picked to finish last in the conference, Ole Miss is now 3-0 in conference play.

“I just think that healthy rivalries are when both teams are really good and play that well in front of that kind of crowd,” said Ole Miss head coach Kermit Davis. “I’m so proud of our team though. I’m proud of our fans. I’m proud of our players. It was a great, great win for us.”

How Ole Miss weathered the first half storm was nearly beyond comprehension. Leading scorer Breein Tyree went down less than one minute into the game. At the time he appeared to severely hurt his shoulder fighting through a screen on defense. Tyree would go to the locker room briefly, before returning and battling through the injury. Senior guard Terence Davis, who scored a team high 27 points in Wednesday’s upset of Auburn, picked up his third foul with 6:25 to go and was forced to sit the remainder of the first half. Despite all that went against them, and numerous Bulldog runs, the Rebels would enter the half trailing by only 41-39.

“Our team is going to go through pockets of adversity against good teams like this. Our guys have heard us say it since we’ve taken the job. Toughness things that we go through in practice hopefully builds you for these kind of moments,” Davis said. “I thought we held tight. Devontae Shuler made some big plays in the end of that first half… we just kind of stopped the bleeding and got into halftime.”

Where the Bulldogs were unable to put their foot on the Rebel throats when given the chance in the first half, they opened the second half with a burst. Coming out of the half, Mississippi State scored the first seven points. Freshman Blake Hinson, in his first taste of the rivalry, single-handedly kept the Rebels alive for a stretch early in the half. At one point, he hit three consecutive three-point baskets, nine of his career high 26 points on the night.

“I thought we did a horrible job on Blake Hinson. We knew who he was – he’s a three point shooter,” said Mississippi State head coach Ben Howland. “This is two games in a row now we’ve had power forwards on opposing teams have a career night against our defense.”

A Tyree dunk in traffic with 6:21 to play grew the Ole Miss lead to eight, but Mississippi State would slowly claw back. The game would go back and forth until Nick Weatherspoon hit a three-pointer with 1:12 left in the game to tie it a 77. Tyree would ice the game on the next Rebel possession, dropping in a driving layup that would spark Bulldog fouling. Ole Miss would go on to win 81-77.

Hinson’s 26 points led the Rebels. Despite having to leave early, Tyree came back to score 19 points with 5 assists. Terence Davis had 12 points, 5 rebounds and 4 assists. For Tyree, he said that his shoulder pain was severe at the start but adrenaline took over, allowing him to play the remainder of the game.

“It shows a lot of his character and his toughness to come back and play,” Davis said. “And it didn’t go as great for him, but he just played. That’s what experienced guards, experienced players do.”

Today was the first time Ole Miss has played back-to-back games against teams in the AP top-15 since the 2005-2006 season; They won both. It’s a team now deserving of being ranked in the AP Poll after one of the best stretches in program history. The Rebels have now won ten in a row, their longest winning streak since the 2007-2008 season. It’s taken just 15 games, but Kermit Davis has made his stamp on Oxford.