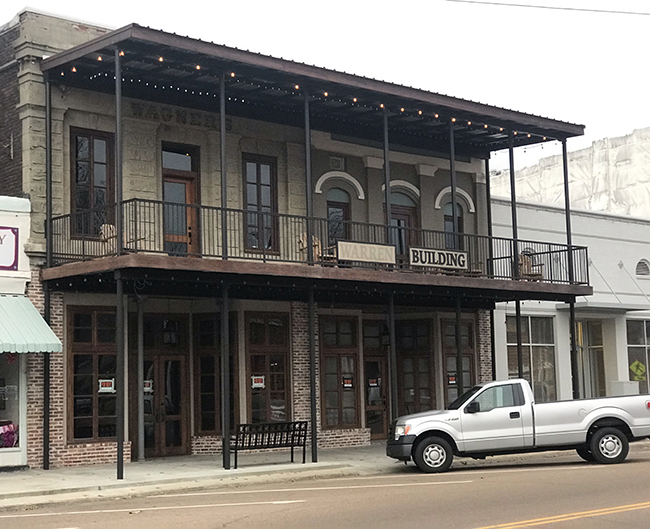 The Water Valley Board of Aldermen held a special meeting on Friday to discuss the fate of one of their oldest buildings.

It was reported last week that Rebel Rags owner Terry Warren had requested a permit to demolish the Wagner Building located on Main Street. Warren purchased the building in 2017 with the intent to open a restaurant and bar. He has requested the permit to tear down the buildings in an attempt to get a tax write-off to recoup money he spent on renovations to the building.

W.B. Wagner built the Wagner Building after he and his wife, Mamie, moved to Water Valley from Philadelphia. It has been standing as the centerpiece of Main Street for over 100 years.

Warren cites Water Valley’s beer ordinance as the main reason. The ordinance, which was passed on December 2, 2014, does not allow a restaurant or bar to serve beer to a patron unless it is ordered with a meal.

The ordinance reads: ‘No person or licensee under this ordinance shall sell, give or dispense or permit to be sold, given or dispensed beer or light wine to a patron without serving to such patron a meal therewith or anticipation thereof.’

Members of the Water Valley community gathered at City Hall on Friday to voice their opinions over the potential of the building being torn down. Jamie Harker was one of those in attendance and expressed her concern over the safety of her shop, Violet Valley Bookstore, if the Wagner building is torn down.

The building the bookstore is in was originally an alley between the Wagner Building and the building BTC Grocery now occupies. Once a roof was put over the alley in the 1890s it became a cigar and bookstore shop and has been several other stores before becoming a bookstore again.

“It’s a quirky little building,” Harker said. “It’s one of those buildings where I think they quite literally put a roof between the two buildings and kept the sides as the two walls of the building. So, I’m really concerned if they tear that building down I don’t know what’s going to hold it up.”

At the onset of the meeting the board explained they would not be determining the fate of the buildings that night. Warren’s request for a demolition permit is on the agenda to be presented to the Water Valley Planning Commission for their meeting on Monday night.

Since 2012 Water Valley’s Main Street has been a National Registry of Historic Places District and the Wagner Building is a contributing element of the district. That does not prevent the building from being demolished but Water Valley will meet tonight to discuss the potential of forming a historical commission that would add another layer of protection to those buildings in the historic district

“We’re at a point now where it wouldn’t hurt and it would be a good thing,” Main Street Alliance Director Mickey Howley said. “It would kind of control where the town is going and the historic district. Most of these districts end up having a positive benefit to the town even though by and large most people don’t like this kind of control.”

The board passed an amendment, striking the sentence from the beer ordinance requiring the restaurant to anticipate a meal being ordered with a beer. The amendment was passed with a 3-2 vote by the board.

“We are steeped in rich history here and we want to continue to preserve that,” said Ward 3 alderman Cinnamon Foster, who presented the amendment.

Mayor Donald Gray has ten days to veto the amendment. At Friday’s meeting Gray said “I will study on it. I have ten days.”

The Oxford Eagle has attempted to contact Terry Warren for a comment but has been unable to talk to him.