2019 an opportunity to bring Ole Miss track to new heights 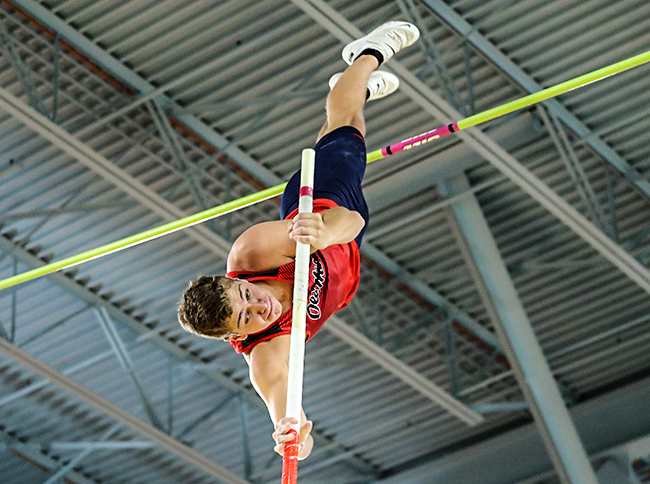 Ole Miss’ Peyton Weismann participates in the pole vault at the Blazer Invite in Birmingham, Ala. on Friday, January 11, 2019. Weismann won the event with a new indoor best of 5.20m, which is 17 feet, 0.75 inches. (Petre Thomas/Ole Miss Athletics)

OXFORD – Connie Price-Smith didn’t know what to expect when she arrived in Oxford in 2015. After spending her prior 14 years at her alma mater, Southern Illinois, she was tasked by Ross Bjork to reinvigorate the Ole Miss track program. She has done just that from her head coaching position, taking the Rebel track program to new heights in just her three seasons on campus. Now in year four, the 2019 season is just another building block for the program.

“Coming here, I wasn’t really sure what was in store. I think it’s progressed really nicely over the first three years,” Price-Smith said. “Now we’re starting our fourth year and we have our own athletes, the kids we recruited. I’m excited.”

Indoor track got underway for the team this past weekend, competing at the UAB Blazer Invitational in Birmingham, Ala. Sophomore Peyton Weissmann was the individual high point of the weekend. Weissmann won the pole vault with an indoor best of 5.20-meters, putting him in the top-3 all time at Ole Miss. However, there were a handful of other notable performances, particularly for some young Rebels making their competition debut.

“We ran off-events instead of some of our normal distances. However, overall I think we had a really good showing,” Price-Smith said. “I was excited to get our young kids out there and competing. While they may have been nervous, they didn’t show it when they stepped on to the line.”

It is a young Ole Miss team. Price-Smith emphasized that they might need some of the younger kids to step in early and fill shoes of much older athletes. One place this is evident will be in throwing events. Ole Miss lost All-American thrower Janeah Stewart to graduation. Now, they will rely heavily on a freshman, Tedreauna ‘Teddy’ Britt, and a sophomore, Shey Taiwo to fill her shoes. Taiwo finished third overall in the weight throw at Birmingham with a personal best of 20.83-meters.

“We have a lot of freshman and sophomores. The positive is you get to see their potential and watch them grow. You get to sort of mold them,” Price-Smith said. “The negative is that they’re really young and sometimes their nerves get the better of them when they’re competing against much more experienced athletes.”

The strong suit of this Rebel team will be with the distance athletes. Coming off one of the best cross-country seasons in Ole Miss history, one in which they won their first ever SEC Championship as well as the NCAA South Regional, there are a lot of strong runners that will need to score highly for the track team.

Many of the distance athletes didn’t compete this past weekend in Birmingham. They will get their first taste of indoor action this upcoming weekend at Vanderbilt. For the boys especially, track events are quite the different race than the 8 or 10-kilometer races they see in cross country, but for some, it’s races they are more attuned to compete at.

“It’s the same kids but it’s not the same race. What doesn’t change is the mentality. When they go out there they want to compete and be the best,” Price-Smith said. “Some of them, although they run cross country, they are milers or 3-K people. They come over to track and do the same things.”

The indoor season runs from now until early March, with the NCAA Indoor Championships in Birmingham, Ala. on March 8-9. Now in competition mode, the Rebels will compete just about every weekend between now and the NCAA Championships, getting back on the track next weekend in Nashville at the Vanderbilt Invite.

A Crosstown Classic: a look at Oxford-Lafayette Round 2