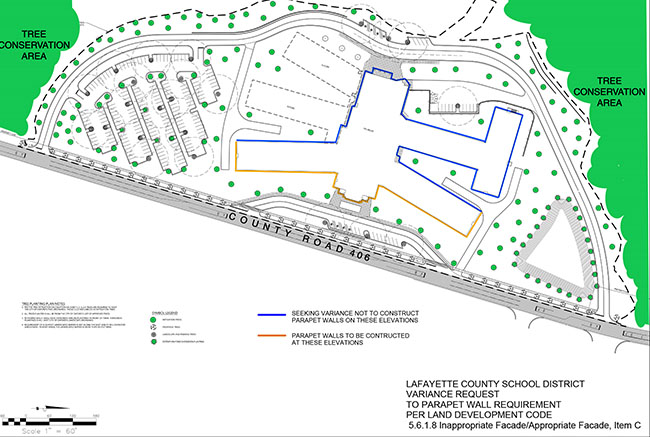 OXFORD — The Oxford Planning Commission approved a variance request from the Lafayette County School District pertaining to the construction of the new elementary school on Monday during their monthly meeting.

The request is a variance from Section 5.6.1.8 of the Land Development Code, which regulates that a building with rooftop mounted equipment, shall have a parapet wall on all sides of the building. The requirement is due to many buildings which have been constructed along highly travelled corridors with roof-mounted equipment exposed to public view.

The school district proposed to the planning commission to construct a parapet wall along only the front of the new elementary building, facing County Road 406 that will screen any rooftop equipment from the primary view of the building.

Also during Monday’s meeting, residents of the Rolling Woods subdivision, which is adjacent to CR 406 and will be behind the new school, voiced their concern with building it near their residential living spaces. They do not wish to see the removal of the trees lining the back of the subdivision that would serve as a buffer between their neighborhood and the elementary school.

The plans that were submitted complied with the city of Oxford’s regulations, but the Commission approved them on good faith that LCSD will work with the city to try and identify any cost effective ways to maximize that buffer, if possible. In the application for the zoning ordinance it states there will also be trees planted along the 50-foot buffer at the west side of the property that adjoins the neighborhood in an effort to obscure the building from the residents.