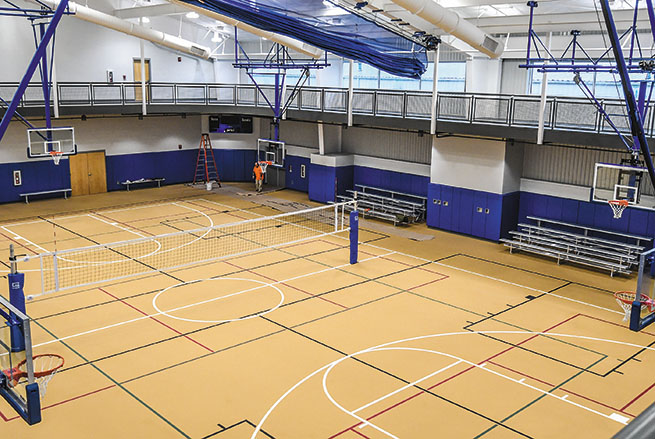 The Oxford Park Commission is ready to show off their newest attraction.

Construction on the new Oxford Activity Center is completed and set to host its first activities next week. OPC was handed the certificate of occupancy last week, allowing them to begin to hold events and to begin moving in equipment.

The center will only be open at night for the first few weeks to allow OPC to conclude its basketball season. Full operational hours will begin closer to spring.

“Our main goal has been to get those kids (playing) games in the new arena this year,” OPC community relations director John Davis said. “We knew it would be on tail end of the season. …the next big goal after getting the kids playing time on the court is to finalize the hiring process (of staff) and coming up with a schedule of when it’s going to be open and everybody getting on the (walking) track.”

A popular amenity in the new building is the walking track on the second floor, which wraps around the entire length of the building. There are multiple full-sized high school basketball courts that will feature proper lines marked for other sports, including pickleball and volleyball. A new gymnastics wing is also in the new building that will have new equipment installed in the coming months.

On the second floor, there will be a video game room with games supplied and run by Bits Arcade out of Water Valley. A brand new room was also built to hold dancing and yoga classes.

Groundbreaking for the center took place in December of 2017, but structures were not put into the ground until last May. The entire project, which was overseen by Innovative Construction Management (ICM), stayed on schedule despite a weird year for weather in Mississippi.

“I think when people are at that point to where they see it’s so close their patience is lower than when it was at the start,” Davis said. “It grabs your attention. It’s a huge facility and it’s a stunning facility. I think when you go in there you’re really amazed at what it looks like.”

The current OPC activities building next to the John Leslie Tennis Courts will remain where it is, and continue to house the Leisure Lifestyles activities. There are also plans to renovate the building sometime this year.

The building will also come in under budget, as the proposed budget was $12.9 million. Once everything was completed and finalized, the official number is expected to fall between $11-12 million.

“Seems strange because it is such a big project,” OPC director Seth Gaines said. “Seven months and you’ve got everything that’s in there, it’s just amazing.”

Plans are in place to do an official grand-opening celebration in the spring, with hopes the center will be fully operational by April 1.