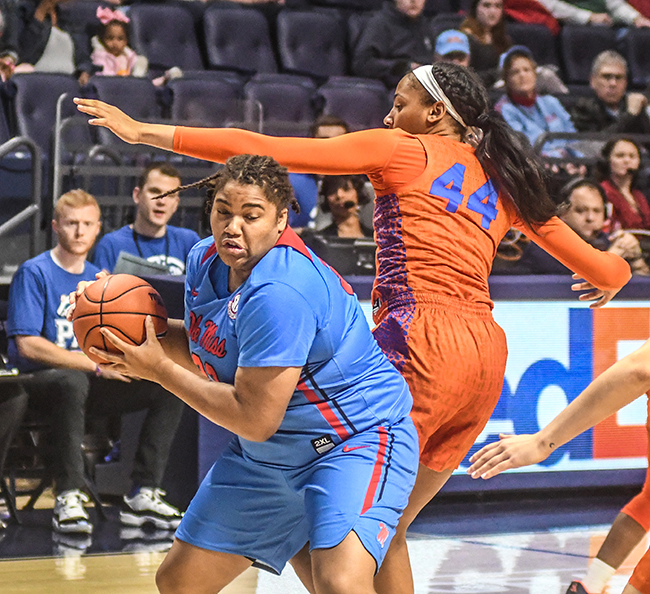 Ole Miss capitalized on an outstanding third quarter, where the Rebels’ success was as fortuitous as it was by design, but still needed to hang on in the fourth quarter to secure its second conference win 76-66 on Sunday afternoon.

The Rebels (8-11, 2-3) took advantage of a third period where the Gators shot 0 for 6 from the field during a six-minute span. Ole Miss shot 4 for 4 during the same span and took a 56-47 lead into the final period.

Florida’s shooting offense, which abandoned its regular 3-point-laden offense for a game with over 20 post points, would bring the Gators within two of the Rebels lead, using a 9-0 run in the fourth quarter.

Going into the contest, head coach Yolett McPhee-McCuin said she was nervous about Florida’s 3-point prowess, as the Gators average 27 3-pointers per game.

Luckily for her, the Rebels didn’t have to match that kind of fire power.

Timely defense and shooting by LaKaris Salter and Crystal Allen put the game away, while Mimi Reid fouled out early in the fourth quarter. Shandricka Sessom essentially ended the game with a 3-point shot that put Ole Miss up 70-61 with 1:03 left, while Allen put on the finishing touches from the free throw line.

Sessom led the Rebels in scoring with 19 points. Salter scored 18, while Allen scored 14.

McPhee-McCuin said Sessom’s performance was huge for Ole Miss, but it was also one that Sessom has prepared for both through practice and in games.

“We’ve been in games, and have had to play games, without Mimi,” McPhee-McCuin said. “No one panicked or anything.”

McPhee-McCuin said Sunday’s win was easily Ole Miss’ most complete win of the season, even better than the team’s last win over No. 16 Kentucky.

The Rebels were paced by Salter and Sessom early on, who both scored in double figures in the first half. Ole Miss also held off a second quarter collapse that the team has been used to this season.

“Coach always told me: when I get the ball in the block, go to work,” Salter said. “I also made some great passes to my teammates, they knocked down some great shots. I think I just took advantage of what they gave us.”

Ole Miss turned the ball over eight times in the first half, while Florida went on a quick 6-0 run near the end of the second quarter. The Rebels would go into the half with a one-point advantage, 34-33, although Florida outscored the Rebels in the second quarter 16-12.

Florida took advantage of some Ole Miss’ fourth-quarter miscues, which included bad passing and turnovers, but the Rebels’ 54 shooting percentage from the floor helped propel them past Florida. The Gators shot 36 percent from 3-point range, better than its 31 percent per game average.

Should the Ole Miss beat Vanderbilt on January 24th, the team would secure its first SEC three-game winning streak since the 2015-2016 season, when they beat Auburn, Kentucky and LSU in a row.

Salter said staying in a mindset to get better, in conditioning and preparation, is how the team can keep the momentum going into its next game against Commodores. However, Ole Miss hasn’t won at Vanderbilt since 1987.

McPhee-McCuin said it’s not hard to keep momentum flowing after a win, however she contended getting that first, elusive win was the hardest one. Now, she’s conditioning the Rebels to play every game like everything’s on the line.

“We got over that hump with Kentucky,” McPhee-McCuin said. “We treat every game like a championship. We don’t care if we’re not the team that was favored to win, because in a championship, that’s what makes March Madness so great. Every game for us, we have decided to treat like March Madness.