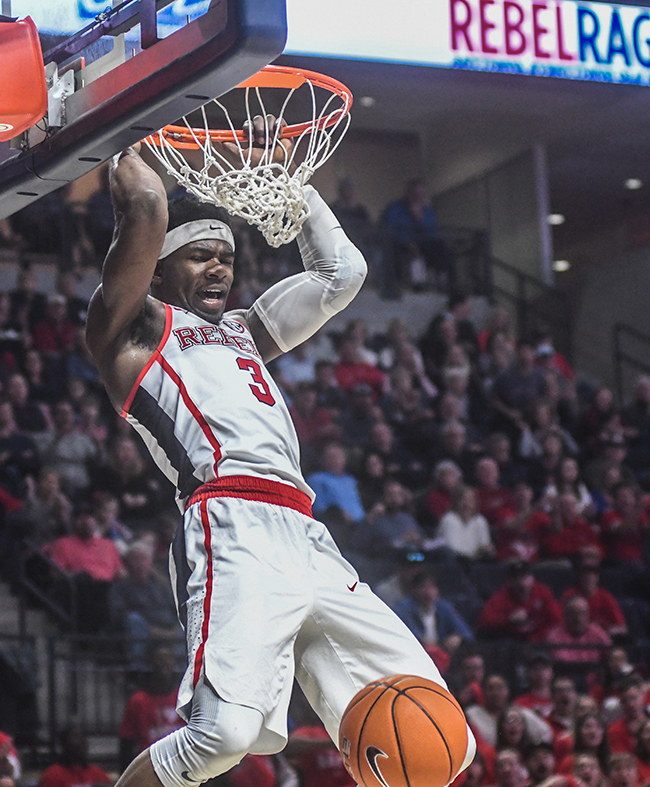 OXFORD – Winning in hostile environments has been a struggle in the past for this Ole Miss basketball roster. Going 1-10 away from The Pavilion in the 2017-2018 season, this iteration of the team has been different – they’ve already won three true road games and are 2-0 on the road in SEC play. Kermit Davis has built this Rebel squad to win on the road.

For the players, winning away from home starts with facing adversity, and facing adversity begins in the practice gym. Senior guard Terence Davis said practices this year are different – they’re harder. He says the pace that practice runs at increases the difficulty. The tempo that everything runs in at the practice facility prepares them for uncomfortable atmosphere’s on the road.

“Everything we go through in practices, the adversity we go through, it’s made for us to win on the road,” Terence Davis said. “Just be yourself. When adversity hits, don’t change your character. Don’t try to do anything out of the norm. Just remain yourself.”

Strategically, there are a few things the coaching staff keys in on for road trips. Keeping the hostile SEC crowds out of the game is important. To Kermit Davis, that starts with controlling the ball and preventing the opposition from taking easy buckets to get the crowds going.

The Rebel team gets back on the road Tuesday, traveling to Tuscaloosa for their third road game in the conference. With Ole Miss falling slightly to No. 20 in the AP Poll, they play 11-6 Alabama at 8 p.m. Tuesday, a chance to pick up their fifth SEC win.

It’s a young and athletic Crimson Tide team. Their two top players in both minutes and scoring are a freshman, Kira Lewis Jr., and a sophomore, John Petty. Terence Davis said he’s been impressed by their athleticism and team defense when watching them on tape.

“They’re a defensive team. They really guard you. They make you move the ball,” Terence Davis said. “At home and they’re coming off a tough game at Tennessee. They gave Tennessee a pretty good run. We’re going to get their best shot.”

Alabama is coming off a very tough loss, falling to No. 3 Tennessee on the road by only three points. Really, it’s a game they should have won. The Tide shot just 44-percent from the free throw line in the road loss, making just 4 of 13 second-half free throws in a close game.

“It just shows you how good Alabama played. Tennessee hit them early. A lot of teams Tennessee just pile drives through, but Alabama withstood a great run,” Kermit Davis said. “They matched Tennessee’s physicality. If it wasn’t for the free throw line, Alabama should’ve won the game.”

The Rebels will likely be dealing with a hampered Devontae Shuler, yet again. Nursing a stress reaction in his foot, Shuler didn’t practice yesterday. Saturday, in the win over Arkansas, Shuler came off the bench for the first time all season, playing 25 minutes, down from his 36 minutes per game during the first three games of the SEC slate. Tip for the Alabama game will be at 8 p.m. Tuesday night, televised on ESPNU.