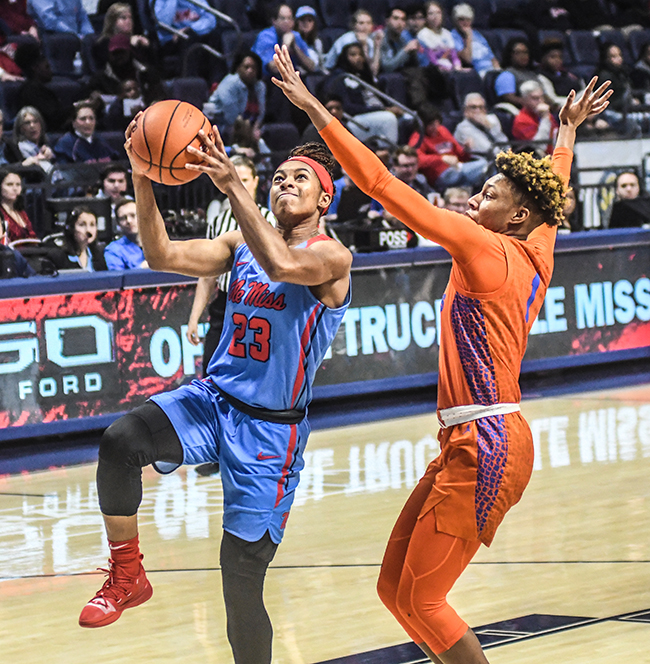 Ole Miss women’s coach Yolett McPhee-McCuin jumped into the media room after knocking off Florida 76-66 on Sunday and couldn’t help but throw out a few passionate fist pumps.

The win was only the Rebels’ second conference win of the season, but the excitement from McPhee-McCuin paints a bigger picture.

An Ole Miss team that was expected to finish dead last in preseason polls is finding a semblance of a groove.

“Winning cures a lot,” McPhee-McCuin said. “It’s really hard to convince someone to trust when you’re not winning.

McPhee-McCuin said Ole Miss enjoyed its best win of the year against Florida on Sunday. The Rebels weren’t perfect, but they shook off specific woes that have been plaguing them most of the year.

Florida outscored Ole Miss 16-12 in the second on Sunday, but McPhee-McCuin’s squad made up for losing the second quarter with 28 points off 16 turnovers, and 32 points in the paint.

“We knew they were going to be aggressive with whatever defense they played,” Florida coach Cameron Newbauer said.

Forward LaKaris Salter’s performance was one that led the way for Ole Miss, as she finished the game with 18 points, five rebounds, five assists and a block.

Salter was part of a Rebel offensive that had three players in double figures, and shot over 50 percent for the game. That 50 percent is well over the 39 shooting percentage Ole Miss averages on the season.

Salter said the Rebels’ aggressiveness stems from the team simply playing better with better preparation, which led to an exceptional performance on their home floor.

“I haven’t seen us play hard here in a long time,” Salter said. “For us to translate what we did at Kentucky to here, it means a lot and shows and proves that we’re ready to play.

The Rebels have hit a stretch where they’ve built off a signature win, and have a chance to win three SEC games in a row for the first time since the 2015-2016 season.

They have a great chance to accomplish that against Vanderbilt, which sits at 0-5 in SEC play. After Vanderbilt is a daunting task, taking on No. 7 Mississippi State in Starkville.

However, McPhee-McCuin pointed to the Rebels’ schedule as the main source of preparation for the rest of the season. The team has played perennial contender UCONN, a 16-win Purdue team and Horizon League preseason favorite IUPUI.

McPhee-McCuin said her team isn’t star struck by anyone, and is playing each SEC game like it’s their own championship team.

“When we win, it’s not hard to get them pumped up to get another one,” McPhee-McCuin said. “The hardest one is the first one, we got over that one with Kentucky.”