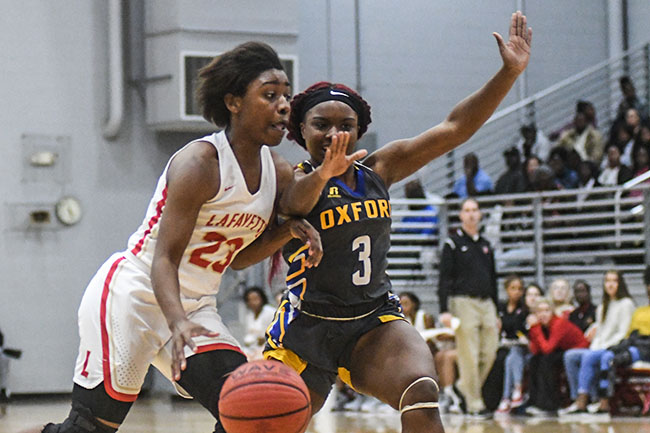 OXFORD – Oxford’s Kylan Blackmon and Lafayette’s Azariah Buford and Kimaya Dixon have been named to the 2019 Mississippi Sports Medicine North All-Star team for basketball. An all-junior team, it’s the first time for all three to be selected to a state All-Star team.

“Both of my girls are very excited. It’s a huge honor to be chosen for this all-star game or any all-star game,” said Lafayette girls head coach Shayne Linzy. “As players, you practice hard and play hard and hope to be recognized. This is kind of one of those steps to showing that all the work you’re putting in is paying off.”

For the Commodores, the two girls make up a big bulk of their output on the season. Buford is averaging 18 points, 7.9 rebounds, 4 assists and 4.5 steals. Dixon is averaging 15.5 points and 7.5 rebounds.

“I told them, ‘You’re just juniors. You made this all-star game, which is great. But you have to keep proving to yourself and everybody that you can be the players that you want to be,’” Linzy said.

On the Oxford side, head coach Drew Tyler is more impressed by Kylan Blackmon’s defensive chops and burgeoning leadership role than his offensive output. However, his output speaks for itself. Blackmon is averaging 15.4 points, 6.1 rebounds and 4 assists.

“He’s come full circle as a defender. We’ve been putting him on the toughest assignment on the defensive end numerous times this year,” Tyler said. “He’s really buckled down and become a defender. That’s great for Oxford basketball when you have a junior doing that.”

A silent leader, Tyler said that that Blackmon has become more vocal as he matures and is developing to become sort of an assistant coach on the court. As a junior, he’s a team captain for the Chargers, in large part because he’s not worried to tell some of the kids, even older players, some difficult things that they may not like to hear.

A maximum of two players per school are allowed to be selected for the teams. Lafayette’s girls were one of seven Class 4A – 6A schools to place two members on a single team. Lafayette’s Mariah Hollard and Xhiir Burgess made the 2018 team.

The All-Star team combines girls and boys from three classes of play into one team. Therefore, despite Lafayette being a Class 5A school and Oxford being a Class 6A school, they will both be playing on an integrated team of players from Class 4A, Class 5A and Class 6A.

All-Star games will not be played until well after the conclusion of playoffs, with a date set for Mar. 23 in Clinton. Games will be played at A.E. Wood Coliseum on the campus of Mississippi College.

Women’s basketball is hitting its stride and having fun…