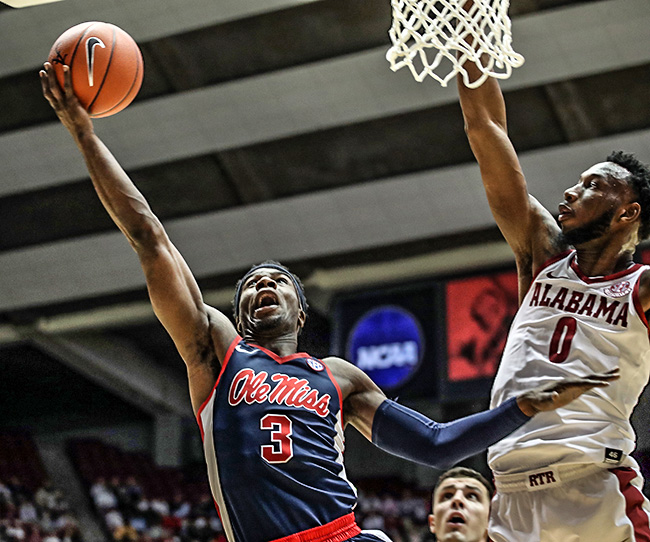 Terence Davis scored a team-high 10 minutes in limited action, fouling out early in the second half. Breein Tyree added nine, while Bruce Stevens tallied seven points and team-high six rebounds. Freshman Luis Rodriguez scored a career-high seven points in 18 minutes off the bench, going 2 for 2 from the floor and 3 of 4 from the charity stripe. As a team, the Rebels shot 40 percent (20 of 50).

Blake Hinson scored the first five points for the Rebels, but had to sit after picking up two fouls within the first two minutes. Ahead by one, Ole Miss went through a four-minute scoring drought. Alabama took advantage with an 8-0 run to swing the game in their favor, taking an early 14-7 lead.

Terence Davis broke the dry spell by scoring the team’s next seven points and making it a one-possession game. However, the Crimson Tide countered with a 9-2 run to build a double-digit cushion. A three-pointer by Davis followed by a Tyree runner sliced the margin in half, 26-21, and forced Alabama to call timeout.

The Rebels turned the ball over late in the first half, allowing the Crimson Tide to grow its advantage and take a 40-26 lead into the locker room. The Alabama bench outscored the Ole Miss bench 21-0 in the opening half, and the Crimson Tide turned nine offensive rebounds into 14 second chance points. Petty’s 12 points led the way for Alabama, while Terence Davis’ 10 points paced the Rebels.

Alabama came out and increased its lead, while Ole Miss lost Terence Davis after the senior picked up his fifth foul with 16:09 left in the contest. After beating No. 13 Kentucky to begin SEC play, the Crimson Tide completed its second win over a top 20 team in Tuscaloosa.

After playing six straight SEC games, the Rebels will then take a break from conference play and return to The Pavilion to host No. 24 Iowa State in the SEC/Big 12 Challenge on January 26. Tipoff is slated for 11 a.m. CT on ESPN, and the challenge will be the first game between two ranked teams in the history of The Pavilion.